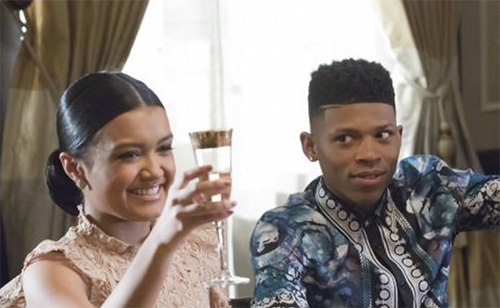 ‘Empire’ spoilers for Season 2 Finale Episode 18 ‘Past is Prologue’ on Wednesday, May 18 are hot! The finale action looks explosive and lives are on the line but the big question is whether Jamal lives or dies. Is FOX pulling a “Jon Snow” switcheroo on Empire fans?

Lucious Lyon (Terrence Howard) has a lot of nerve going to see Freda Gatz (Bre-z) in jail to ask why she tried to shoot him. Freda tells him he knows why. Lucious knows why, of course, but he didn’t know that Freda knew he had her dad Frank Gathers (Chris Rock) killed.

Crackhead Carol Hardaway (Tasha Smith) cannot hold her liquor and blabbed it. Did Carol know what she was sparking when she ratted out Lucious? If Cookie Lyon (Taraji P Henson) finds out Carol got her son shot (even though Lucious is ultimately to blame), it’s on…

Also, now that Rhonda Lyon (Kaitlin Doubleday) thinks that Anika Calhoun (Grace Gealey) shoved her down the stairs, she’s understandably furious. Rhonda goes nuts and punches Anika in the face at a family gathering and yells, “I know you pushed me b*tch!”

But that’s just the start of Anika’s trouble. Tariq (Morocco Omari) is trying to leverage her to testify against Lucious so it’s just a question of who will kill her – Lucious, Rhonda or Thirsty Rawlings (Andre Royo). Anika perches on a balcony pondering suicide and scares everyone.

Cookie wants to stash Anika out of the way so they don’t have to kill her but that’s when Rhonda attacks and tells them the shoe evidence and says Rhonda pushed her and killed her baby. That shifts the family’s perspective. Anika swears she didn’t do it – was she set up to look like the culprit?

We’ve also got the glam wedding of Laura Calleros (Jamila Velazquez) and Hakeem Lyon (Bryshere Gray) – but will they make it down the aisle? At the ceremony, Lucious tells Cookie he never should have let her go and that’s why he never married anyone else.

The wedding has tons of guest stars including famous hip hop singers and Anika is served by a court official at the wedding. One Empire spoiler teases that the Laura-Hakeem wedding may fall apart, but Cookie and Lucious may step up to the altar instead.

Once Cookie knows about Anika and the FBI, the Lyon matriarch uses the wedding to talk to people from their past to shore up any leaks and Lucious begs her to be with him on this and says he needs her to be ride or die.

As for Jamal’s fate, there’s this. In the official FOX synopsis for the Season 2 finale, it says “After a life-changing experience, Jamal refuses to make music until his family ends its seemingly endless cycle of violence and fighting.”

That sure sounds like fan fave Jamal lives. But Jamal portrayer Jussie Smollett tweeted the message seen below and Empire fans went berserk complaining that the FOX show killed off its best character. But did they really?