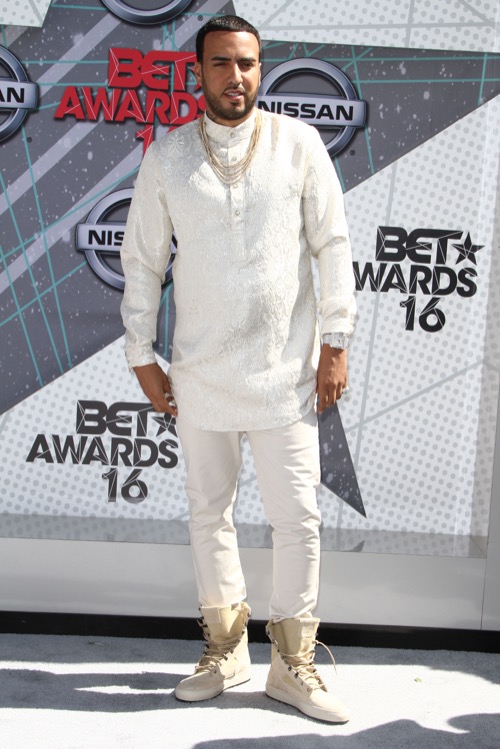 Empire Season 3 spoilers are heating up and it looks like French Montana, Khloe Kardashian’s ex, will be guesting for an arc as one of Lucious Lyon’s buddies. Rapper Montana will appear as a character named “Vaughn” who is part of the Empire CEO’s inner circle.

Also in the pic was Birdman, another guest star revealed in Empire Season 3 spoilers. Birdman will be doing a brief cameo, playing himself, as Season 3 of the hit FOX music show kicks off this Fall. Empire was jam-packed with guest star appearances and it looks like Season 3 is on track to do the same.

Also signed on for Season 3 of Empire as guest star is Romeo Miller plus we know that Empire is casting for teenage actors to play younger versions of Cookie Lyon (Taraji P Henson) and Lucious. But the big issue that most fans want to know is who died in the Season 2 Empire finale.

We know that Anika Calhoun (Grace Gealey) and Rhonda Lyon (Kaitlin Doubleday) were in a life and death struggle at the end of the episode and Empire showrunners have confirmed that one of the ladies went over the ledge and did die.

Empire Season 3 spoilers reveal that the death will be revealed as the new season kicks off and that Andre Lyon (Trai Byers) will be hardest hit. Jamal Lyon (Jussie Smollett) will be back on his kick of not creating any music until the violence is solved.

Also playing a major role in Season 3 will be “Tariq the Freak” played by Morocco Omari. It looks like Season 3 is going to kick off with a bang and heat up from there. There are some spoilers that tease that French Montana might play a love interest for Cookie. We’ll see.

Empire Season 3 premieres this Fall on Wednesday, September 21 at 9 pm on FOX. Check back with CDL often for all the latest Empire Season 3 spoilers and news.