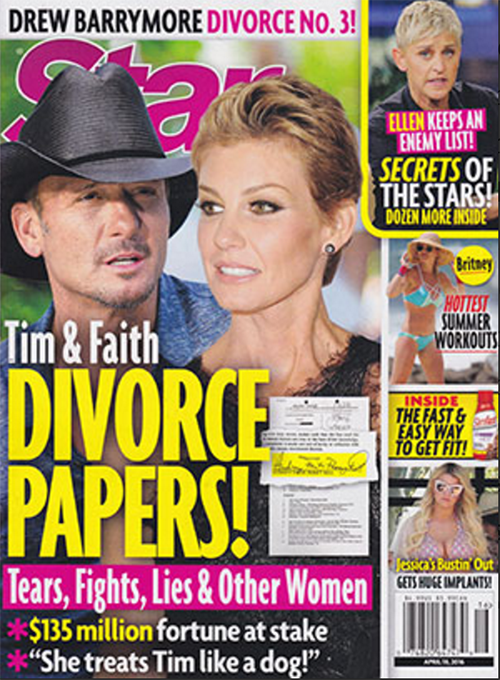 Star Magazine’s cover this week features a photo of the not-so-happy couple. The headline screams, “Tim & Faith Divorce Papers: Tears, Fights, Lies, & Other Women.” The cover goes on to tease, “$135 Million Fortune At Stake!” And, apparently, Faith Hill treats Tim “like a dog.”

According to Star, “After almost 20 years of marriage, friends say Tim McGraw and Faith Hill are living separate lives. Will their trust and control issues finally drive them apart for good?” An inside source who claims to be close to the couple dished to the tabloid, “Tim and Faith have had their ups and downs, but it’s never been this bad before. No one in their inner circle would be surprised if this was the year they ended things altogether. At this point, it’s just a matter of who would file for divorce first.”

This year Tim McGraw and Faith Hill are set to celebrate their 20th wedding anniversary – which means they have been building their joint empire for nearly two decades. It’s no secret that the couple has drifted apart over the years. But we are skeptical they will actually file for divorce. When two celebs have been together that long, and most likely have no pre-nup, they usually just secretly separate and move on with their lives – and avoid all the legal mess of trying to divide up assets.

What do you guys think? Is this really the end of Faith Hill and Tim McGraw? Will 2016 be the year that the country music singers finally file for divorce? Share your thoughts in the comments below!