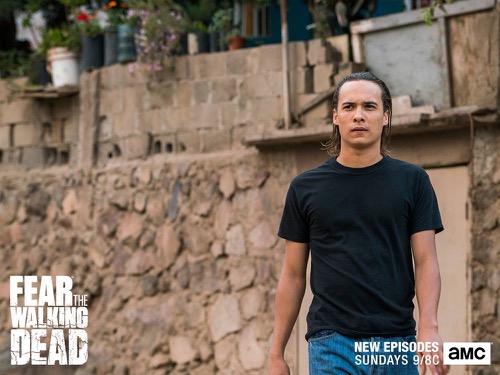 On AMC tonight Fear The Walking Dead (FTWD) the spinoff of wildly popular TWD airs with an all-new Sunday, September 18, 2016, episode and we have your Fear The Walkign Dead Recap below!  On tonight’s FTWD episode called, “Pillar of Salt,” for Madison (Kim Dickens) springs into action when one of the hotel residents gets violent.

On tonight’s Fear The Walking Dead episode as per the AMC synopsis, “Madison (Kim Dickens) lays down the law. Meanwhile, Alejandro (Paul Calderon) shows a darker side of himself at the Colonia.”

Season 2 is shaping up to be a great season and you aren’t going to want to miss any of the unfolding action tonight. We’ll have your Fear The Walking Dead recap of season 2 episode 12 right here for you at 9 PM. In the meantime, check out all our FWTD news, spoilers & more, right here!

Francisco and his family are trying to escape from the compound. They don’t think it is safe anymore. They make their way onto the bus, past the guards. They open the back door of the bus, catch a zombie and use his blood to shield themselves from all the other zombies. They make it through the masses of dead and onto the roadway. A truck stops, they try to hide but they are seen. Two guys with guns get out and terrorize the couple and their young daughter. They think they know him from the supermarket. They take their bags, rifle through their things and lead them back to the road.

Ofelia is on her own and driving a truck full of supplies. She shows up at the Poca Ceilo restaurant. She makes her way around the place, as she flashes back to a moment with a boyfriend. He proposes by the Oceanside after the two eat dinner. She’s crying with joy. Back to present day, Ofeila siphons gas out of cars for her truck.

At the hotel, Madison, and the gang get to work on making the place livable; fishing for food, stocking the bar and getting the generator working. Alicia talks about Nick and how she misses who he was, but not who he is now.

Luciana and Nick spent the night together. They are woken up with the news that Francisco is gone.

Madison and the gang plot when and how they run the generators. Victor answers the door and the mother of the dead bride is on the other side. She stabs Victor in the stomach, drops the knife and then runs off. Victor falls to the floor.

Madison lays down the law. If anyone touches someone else or harms them, they are out.

At the Colona, they are have their own meeting about the escape of Francisco and his family. The doctor preaches faith in each other and about working and staying together. Nick wants to know if he is ok.

Luciana and Nick tell the doctor they are heading out. He asks If she has spoken to the scouts. When she responds no, he gets angry, pulling rank.

Madison leaves with the hotel manager on a mission. She tells the others to take care of Victor.

Madison asks why Elena was fighting with Hector. Elena wanted Hector to talk his brother into coming home, but Antonio won’t come back.

Luciana is angry, Nick wants to know why she is so angry about the doctor.

Madison goes to the warehouse to get Victor’s medication. They have the water that they plan to trade.

Nick goes to visit the doctor. He asks if Luciana is all right. Nick tries to talk him into making the trade. The doctor thinks that they aren’t a threat – they have the numbers and the wall.

Nick makes plans behind Luciana’s back to go to the warehouse.

Victor is losing blood. He is worried that Madison won’t make it back on time. Alicia tends to him, telling him about her work at county high school after he commends her for her bedside manner. She tells Victor about helping her brother with detox and helping her dad. Victor tells her that she has her mom to herself now, but Alicia isn’t sure that Madison actually sees her.

While looking out from a high spot in Colona, Nick sees the guys that took Francisco. They are peering back at him through binoculars.

Ofelia is having a flashback to a time with her mother. Her mother tells her about her bloody and scary past. A past her and her husband shared.

Madison returns with the medicine. Elena tells the gang about Madison’s notion that she has found Nick. Alicia gets angry, she tells her that she is here and Nick is there. He made his decision. Why is she still looking for him? Why isn’t she enough for Madison?