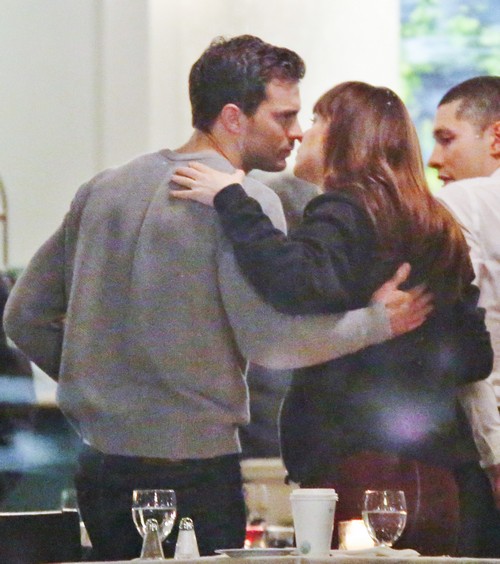 The Jamie Dornan and Dakota Johnson Fifty Shades Darker onscreen chemistry is said to be going downhill—not that they captured a lot of following due to their on-cam relationship in the first place.

Razzie’s “worst onscreen couple” could be struggling to reconnect with each other despite their best efforts to play Christian Grey and Anastasia Steele efficiently and believably for Fifty Shades Darker.

Word has it that Jamie Dornan lacks the vigor and passion to work with Dakota Johnson ever since his wife Amelia Warner gave birth to baby no. 2, whose name remains unknown for the time being. Dornan proved his love and loyalty to his wife in the wake of rumors and speculations that he was developing the hots for his “Fifty Shades” leading lady.

And way to go Mr. Dornan for knocking up Amelia just two years after your first child, Dulcie, arrived.

Sadly, baby no. 2 could have made a huge impact to the couple, such that Jamie Dornan is now struggling to channel his leading man role to Dakota Johnson, who just last month admitted to not feeling the need to have a partner.

Now that the two are back on set and reprising their characters on the well-received adaptation of E.L. James’ S&M novels, it seems the onscreen connection between the two has greatly reduced. Just last Wednesday, Dornan and Johnson were spotted sharing a really awkward kiss on the Toronto set of Fifty Shades Darker.

Daily Mail even noted that apart from the tense peck, Dakota was seen “looking bored” and even resorted to using her phone instead of conversing or rehearsing with her costar.

This is not at all surprising since last month the producers of the show were disappointed by the lack of on-cam heat between the actors that some scenes had to be re-shot.

Nevertheless, despite the lack of chemistry between Jamie Dornan and Dakota Johnson and the predominantly negative reviews of the first installment in the franchise, Fifty Shades Darker could be looking at another blockbuster success since the first one raked in more than $571 million worldwide.

Do you think Jamie and Dakota do not have onscreen chemistry? Sound off below and continue following CDL for more celeb news and the latest gossip!

Jamie Dornan and Dakota Johnson on the set of ‘Fifty Shades Darker’ in Vancouver, Canada on March 15, 2016. FameFlynet