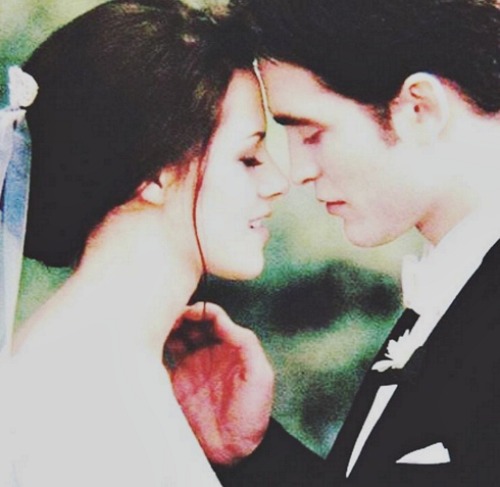 In fact, rumor has it that even though FKA Twigs is supporting her fiancé as he goes back to his ‘Twilight’ roots, she is feeling threatened knowing he’ll be spending a lot of time with his old flame Kristen Stewart.

After speculation the couple had pulled the plug on their engagement this summer, both Robert Pattinson and FKA Twigs were spotted on a day night in Los Angeles this past weekend. Of course, the timing is rather suspicious to both fans and critics alike, especially since there are so many rumors floating around of a possible Robert Pattinson and Kristen Stewart reunion.

Could this be FKA Twigs’ way of showing the public that she still has a firm hold on her man? Does this also mean that Robert and FKA’s wedding is still being planned? Whatever the case, this is the first time they’ve been spotted together since May, when they both walked the red carpet together at the MET Gala in New York City.

Of course, no woman wants to see her fiancé work together with an ex-girlfriend again. Knowing how much their relationship was such a big deal to fans, there’s no doubt that FKA might have some concerns with Kristen, especially if they will be spending a lot of time together on set or worse, film love scenes together.

Sure, Kristen might be in a relationship with her girlfriend Alicia Cargile, but what if their old flames reignite on the set of  ‘Twilight’ again? What if Robert falls in love with Kristen again? Or is Kristen going to deliberately make a move on Robert?

Never say never, but anything can happen, especially when it comes to make ups, break ups and love in Hollywood.  Let’s not forget that Kristen also the reason why Liberty Ross ended her marriage to Rupert Sanders in 2012 when it was alleged that the director was cheating on his wife with the actress.

Of course, no one even knows if Robert Pattinson and Kristen Stewart are even going to make ‘Twilight’ again yet. Nothing has been confirmed and neither Robert or Kristen have made any indication that they are willing to join the supposed project, too.

But FKA Twigs and Robert Pattinson’s latest photos do indicate that they are still together no matter what, even though they are yet to set a date for their upcoming wedding. Tell us CDL readers, what do you think?

Should FKA Twigs be worried about Robert Pattinson and Kristen Stewart working together again? Let us know what you think by dropping us a line in the comments section below.