‘Game of Thrones’ Season 6 Episode 6 Spoilers ‘Blood of My Blood’: Margaery Faces Walk of Shame – Bran Finds Himself In Danger! 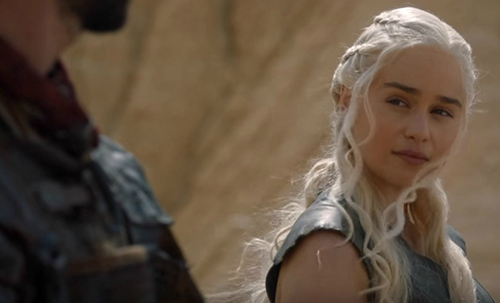 ‘Game of Thrones’ spoilers for Season 6 Episode 6 ‘Blood of My Blood’ on Sunday, May 29 hint that Arya has a critical choice to make, Bran’s life is once again in danger, Sam must face off with his awful father, and a confrontation is brewing in King’s Landing.

The episode title, “Blood of my blood,” refers to a Dothraki phrase, “Qoy Qoyi,” which is how a Khal addresses a bloodrider – a warrior who pledged his life in service. As the sole khal standing, Daenerys Targaryen (Emilia Clarke) leads the horde out of Vaes Dothrak.

Dany rides at the head of the Dothraki with Daario Naharis (Michiel Huisman) at her side. Daario tells Daenerys she’s a conqueror, but she insists, “I take what is mine.” Looks like Daenerys is heading back to Meereen with the horde, but others are heading her way as well.

Theon Greyjoy (Alfie Allen) and Yara Greyjoy (Gemma Whelan) are taking the ships they stole and are heading to Meereen to try and ally with Dany to screw over patricidal Euron in his quest to rule the world.

Meera Reed (Ellie Kendrick) is in a panic because the white walkers got past poor Hodor (Kristian Nairn) and are coming for her and Bran Stark (Isaac H Wright). We have to wonder if there will be a giant white walker zombie-Hodor among the swarm.

Meera tries to protect Bran and bring him out of his fugue state and chants that she’s sorry over and over as the walkers close in on them. Will Bran wake and use his new superpowers he got from the Three Eyed Raven (Max von Sydow) to drive them back or are they done for?

Samwell Tarly (John Bradley) and Gilly (Hannah Murray) arrive at his family home and she asks if he told his parents she’s a wildling. No way. Has Sam’s time at the wall given him some mettle to stand up to his dad Randyll Tarly (James Faulkner)?

In King’s Landing, the High Sparrow (Jonathan Pryce) prepares to send Margaery Tyrell (Natalie Dormer) on her walk of shame/atonement. The Sparrow says she disgraced her house and the king. The Faith Militant stand by to see that she walks the same route as did Cersei Lannister (Lena Headey).

Tyrell forces commanded by Jaime Lannister (Nicolaj Coster-Waldau) move to shut it down. Cersei says their enemies must be treated without mercy. But since Cersei also doesn’t care for Margaery, could she try to shaft the Tyrells while taking down the High Sparrow?

Season 6 GoT spoilers hint that Cersei will agree to stand trial as the High Sparrow has insisted and this lulls the Sparrow into some foolish complacency. The trial in the Sept will turn to danger for the Sparrow, who may decide it’s time to exit King’s Landing.

Arya Stark (Masie Williams) has been tasked to kill actress Lady Crane (Essie Davis). Jaqen H’ghar (Tom Wlaschiha) told Arya this is her last chance. Arya doesn’t like that this is about backstage drama, but if she doesn’t make the kill, Jaqen made it clear her face would be sacrificed instead.

Arya wanted to learn to kill to take out enemies that deserved retribution but doesn’t like this particular order to slay. What will she do? Brienne (Gwendolyn Christie) rides for Riverrun to get help from the Tullys, but it looks like Brienne may find the place preparing for battle.

Also, an old face returns that Arya counted among her enemies and her kills. GoT spoilers indicate Sandor Clegane aka The Hound (Rory McCann) is back and was nursed back to health by a peace-loving new character played by Ian McShane.

Lots happening on the next GoT. Be sure to come back to CDL for a LIVE recap of ‘Game of Thrones’ Season 6 Episode 6 ‘Blood of My Blood’ on Sunday, May 29 and share your comments below.