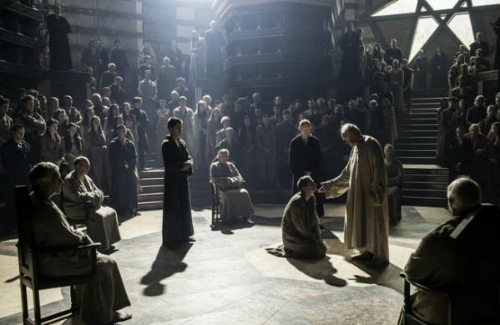 Game of Thrones spoilers for the Season 6 Episode 10 “The Winds of Winter Finale” reveal a new King in the North, Daenerys prepping for her assault on Westeros, major character deaths, and a flaming good time in King’s Landing. Here’s some last minute spoilers for the giant-sized 70-minute finale on Sunday, June 26.

First, don’t expect to spend too long anywhere because it looks like they’re going to hit all the big storylines to offer a bit of closure on old stuff and open new wounds to give us cliffhangers as well – it wouldn’t be GoT without nail biting cliffhangers.

Second, watch the opening sequence in slow motion for bread crumbs. Look for the Stark wolf flag on Winterfell and some Game of Thrones spoilers say there may be a little dragon head by Jon Snow actor Kit Harington’s name belying that he’s a Targaryen!

Tyrion Lannister (Peter Dinklage) gives Daenerys Targaryen (Emilia Clarke) the big pre-game speech. It’s not a locker room, but the steps of the Meereen throne room, but you get the idea. We should see Dany and her crew board the Masters and Iron Islands’ ships and sail.

Samwell Tarly (John Bradley-West) and Gilly (Hannah Murray) roll into Oldtown with his pilfered family sword and he meets the Maesters. Sam will get word, maybe not this season, that Jon is out of the Night’s Watch and wants Sam at Winterfell when he’s done training. 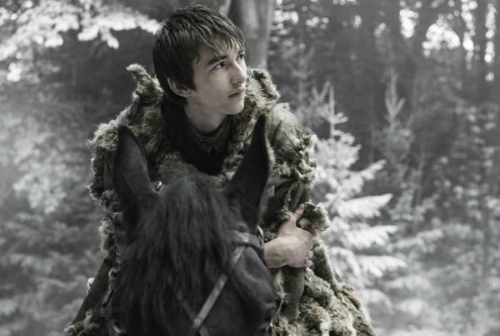 Jon is crowned King of the North thanks to a moving nomination by Lyanna Mormont (Bella Ramsay). If anyone is a fan of breadcrumbs, consider this. Lyanna Stark gave birth to Jon as a baby (and he’s a closet Targaryen) and Lyanna Mormont will give “birth” to Jon as King.

Game of Thrones spoilers tease the coronation because the jeweler who made the crown was running her mouth about a crown she made for Season 6 Episode 10. Some think that Littlefinger (Aidan Gillen) might make a move to be Warden of the North before Jon is crowned.

However, Littlefinger seems to have his eye on another prize – Sansa Stark (Sophie Turner). Sansa and Littlefinger chat in the Godswood and he makes it clear he wants to be with her. Some spoilers say she’ll kill him but that seems extreme.

The only way Sansa would get with Littlefinger is if she’s pregnant and needs a beard. Otherwise, she will want to stay in Winterfell and be a Stark alongside Jon. If Littlefinger wants to win her, he would have to take up residence there.

Ser Davos (Liam Cunningham) confronts Melisandre (Carice van Houten) about Shireen’s burning and she admits the truth to him and Jon but there’s a tough choice there. Jon knows what’s coming and knows they need her to fight the Walkers. 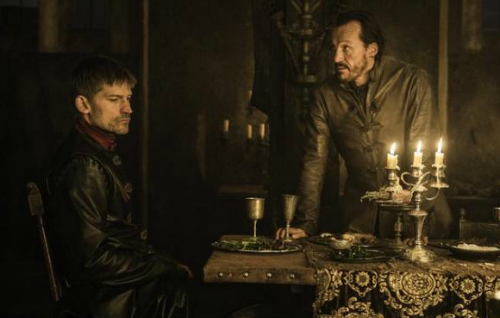 Benjen Stark (Joseph Mawle) finally drops off Bran Stark (Isaac Wright) at the wall and we’ll get the Tower of Joy scene to confirm Jon’s royal birth. It would be great if this played back and forth with his coronation as King of the North.

Varys (Conleth Hill) arrives in Dorne and meets with Ellaria Sand (Indira Varma) and the Sand Snakes since they are the de facto rulers of Dorne now. Varys pitches a lady-strong alliance since Dany is on the way. It should go well.

Arya Stark (Maisie Williams) makes her way back to Westeros and Game of Thrones spoilers reveal she may check another name off her revenge list. We know something is going down at The Twins with Walder Frey (David Bradley).

Some spoilers tease that Jaime Lannister (Nicolaj Coster-Waldau) might do in the Freys and install Bronn (Jerome Flynn) as Lord since the Freys are fickle, homicidal and irritating. But a new GoT spoiler hints that Arya might show up and poison the pies.

The Freys were not on Arya’s initial list, but no doubt are there now. Either way, something is going down with the Freys but Jaime may leave early. Finally, fire is coming thanks to Cersei and the body count in the capitol city could be astronomical.

Also, we’re wondering if Arya will be reunited with her direwolf Nymeria when she gets back to Westeros. Ghost and Nymeria are the only of the Stark wolves left so we may see more of them in Season 7.

Some Game of Thrones spoilers reveal that Jaime will ride up on King’s Landing as it’s all burning down and may see his last son die as he jumps from a window. Season 6 should end up breaking the body count record.

As for cliffhangers, we should expect some ice and some fire. Fire will be Dany heading for Westeros and ice will be the Night’s King heading for the wall and the North. What do you think GoT fans? Are you excited for the finale?

Share your comments below and check back with CDL for a recap of tonight’s Season 6 Episode 10 “The Winds of Winter” finale.