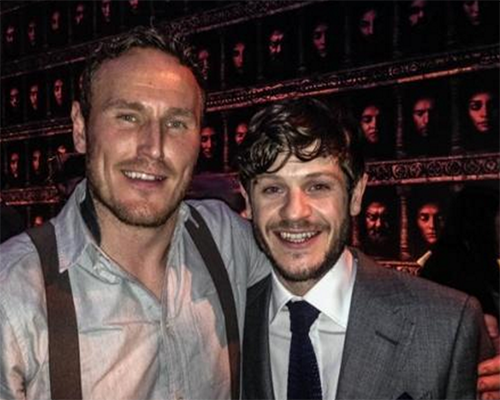 “Game of Thrones” spoilers for Season 6 Episode 3 Oathbreaker tease that we may see another long lost Stark back at last, but it won’t be good news. In the trailer video for episode 3, we see the awful Ramsay Bolton (Iwan Rheon), Lord of the Dreadfort, installed at Winterfell.

Someone comes to see him and casting spoilers indicate this is Smalljon Umber, who will be played by Dean S Jagger. Although he’s not listed on IMDB for Game of Thrones yet, it’s known that he was cast and was filming in Belfast, Ireland with the crew.

That pic below is Jagger with the Bolton Bastard himself, Iwan Rheon, hanging out at a Game of Thrones event. Despite the Smalljon moniker, the guy is huge. We haven’t seen much of the house of Umber in a long time but, in Episode 3, Smalljon shows up and tells Ramsay, “I’ve got a gift for you.”

That sounds ominous – but not for Ramsay – he’ll be thrilled. “Game of Thrones” spoilers reveal he’s delivering Rickon Stark (Art Parkinson) and Osha (Natalia Tena) to the new Lord of the North. We haven’t seen Rickon since Bran Stark (Isaac H Wright) sent him away more than a season ago.

It looks like the Umbers have decided the wind is blowing the Bolton’s way and handing over one of the last Starks may get them on Ramsay’s good side. This is perfect for Ramsay, who needs leverage to get his wife, Sansa Stark (Sophie Turner), to come back to him.

Sansa would definitely surrender to save her little brother, but her big brother, Jon Snow (Kit Harrington), will no doubt factor into how this plays out. He’s back from the dead, may be Azor Ahai, and definitely won’t like to hear that Ramsay raped Sansa and now has Rickon hostage.