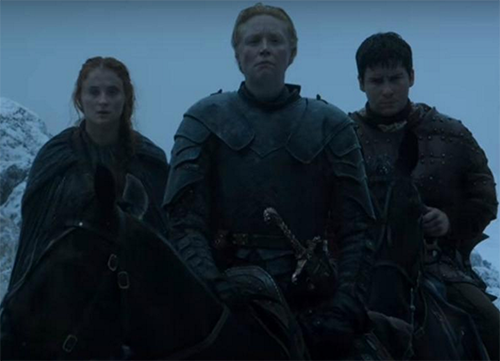 “Game of Thrones” (GoT) spoilers for Season 6 Episode 4 “Book of the Stranger” reveal some faces we have not seen at all this season – nor in a long time. There’s trouble in Westeros and across the sea and from King’s Landing to The Wall. Here’s what to expect on next Sunday’s episode.

“Book of the Stranger” refers to one of the seven books of the predominant religion of Westeros. The Stranger is the only aspect that refers to death and the unknown and seems more monster than male or female. That sounds kind of like what zombie Gregor is now, doesn’t it?

Sansa Stark (Sophie Turner) and her lady knight protector, Brienne (Gwendolyn Christie), and Podrick Payne (Daniel Portman) have made it to The Wall, but has Jon Snow (Kit Harington) already flown the coop? Likely not. Sansa should fill her half-brother in on how Ramsay Bolton (Iwan Rheon) raped her and made Winterfell his bitch. Jon and Brienne are not the only ones concerned with Sansa’s fate, though. Her creepy crusher Littlefinger (Aiden Gillen) is back – he’s not been seen since episode 7 last season.

Littlefinger tells his ward and stepson Robin Arryn (Lino Facioli) – aka the kid who breastfed too long – about Sansa’s plight. Will Littlefinger encourage Robin to send the forces of The Veil to ride to her rescue? And, if so, what’s in it for Littlefinger?

Poor Theon Greyjoy (Alfie Allen) makes it back to the Iron Islands and it’s not a happy homecoming in Pyke. Yara Greyjoy (Gemma Whelan) is furious that she risked everything for Theon and he betrayed her.

Theon says he’s sorry (I bet he is) and Yara is disgusted because Theon is broken and weak. But the real problem is their uncle, Euron Greyjoy (Pilou Asbæk), who no doubt has his eye on the Kingsmoot and the throne of their realm.

The High Sparrow (Jonathan Pryce) wants Marjorie Tyrell (Natalie Dormer) to repent her sins. Is he planning a long humiliating stroll for her like he demanded of Cersei Lannister (Lena Headey)? You have to admit “Game of Thrones” redefines “walk of shame.”

Olenna Tyrell (Diana Rigg) is not having that and Cersei and Jaime Lannister (Nikolaj Coster-Waldau) make an alliance with granny Tyrell and the hand to deal with the church problem. But it looks like the Sparrow may be manipulating Tommen Baratheon (Dean Chapman) to see things his way.

Margaery is reunited with her brother, Loras Tyrell (Finn Jones). Looks like the High Sparrow hasn’t executed Loras yet for his “crimes.” There is GoT spoiler speculation that Loras will demand a trial by combat and that Franken-Gregor may be his champion. We’ll see…

Tyrion Lannister (Peter Dinklage) gets a visit from a former master of Meereen who is asking questions about Daenerys Targaryen (Emilia Clarke). Tyrion lies and says she’ll be back soon. Other speculation indicates Tyrion will make an alliance, perhaps with the Red Priestess, to buy time.

Daario Naharis (Michiel Huisman) and Jorah Mormont (Iain Glen) are still tracking Daenerys. Jorah figures the horde took her to Dosh Khaleen. Looks like the two of them creep in there to try and save her but thing go awry when Daario figures out Jorah has grayscale.

“Game of Thrones” Season 6 Episode 4 spoilers video shows a fight between Daario and Jorah in the bowels of Dosh Khaleen. Daenerys faces a ceremony that will determine her fate since she broke the law of the horde by not reporting to widow central when Khal Drogo died.

Other spoilers tease that Samwell Tarly (John Bradley) and Gilly (Hannah Murray) make it to his home. What do you think, GoT fans? Are you itching to see Drogon finally show up and burn some sense into the Dothraki horde and liberate Daenerys? Will Daario and Jorah end up captives there too?

Share your comments below and come to CDL Sunday May for a LIVE recap of “Game of Throne” Season 6 Episode 4 “Book of the Stranger.”