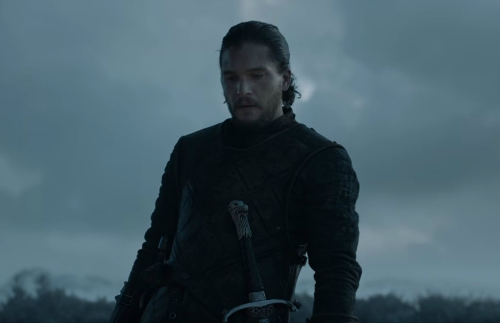 ‘Game of Thrones’ spoilers for Season 6 Episode 9 ‘Battle of the Bastards’ reveal a bloody conflict will soak blood into the grounds of Winterfell and an unlikely hero will ride in to save the day plus one of the Starks is rumored to die as the battle kicks off.

Jon Snow (Kit Harrington) and Sansa Stark (Sophie Turner) have a pre-game talk and she writes him a reality check. Jon thinks the walkers beyond the wall are the worst things there are, but Sansa knows that Ramsay Bolton (Iwan Reoh) is horrid.

Sansa hasn’t faced the white walkers and Jon hasn’t faced the Bolton bastard, so they lack a shared perspective. Jon frets about Rickon Stark (Art Parkinson) who is with Ramsay but Sansa will tell him their brother is as good as dead.

Given Ramsay’s proclivities, dead would be best. Ramsay is a rapist who likes to feed people to dogs, so a swift death for Rickon would be merciful. Jon also spends pre-battle time with Melisandre (Carice van Houten) and tells her his last wishes.

Jon tells the Red Priestess that if he dies again, don’t bring him back – but that’s not a worry. The battle is between bastards, but there’s a reveal coming that Jon isn’t the bastard he thought. He’s a Stark-Targaryen bastard, not a straight-up Snow.

Before the big fight for Winterfell and the fate of the North, Davos Seaworth (Liam Cunningham) discovers how Shireen (Kerry Ingram) met her end in flames. Davos will go confront Melisandre who admits what she did. Will he kill her?

Davos goes into the battle with a fierce anger burning inside him since Shireen was the one good thing in his life. Jon may try and get Ramsay to face him in single combat so that they don’t have to spill the blood of their men.

However, Ramsay will likely answer by killing Rickon. Ramsay is rumored to send the kid running while he shoots arrows and impales the littlest Stark. After Rickon dies in Jon’s arms (if the spoilers are true), it’s on.

Unfortunately, Ramsay has a larger army that’s better organized than Jon’s assemblage of Wildlings and small Northern houses. GoT spoilers indicate that Sansa’s letter was delivered just in time for someone to come save them.

One of the houses in the North may betray Ramsay and join Jon and Sansa’s forces. Plus, the letter Sansa sent to Petyr Baelish (Aiden Gillen) demanded he fulfill his pledge to protect her and asked him to ride North with Vale forces.

More importantly, Sansa promised to reward him. Littlefinger has a creepy crush on Sansa and if there’s a chance she’ll come out of this battle a widow, he will show to help defeat Ramsay and be the hero for Sansa, icky perv that he is.

This battle will be fierce and will fall to the Starks just when it looks like rancid Ramsay will prevail. Spoilers reveal that Jon will triumph and the Northern houses will all flip to the Starks but Ramsay will survive.

Jon will jail Ramsay. However, one of Ramsay’s many enemies, perhaps Sansa herself will reportedly unleash the hounds on Ramsay and feed him to his animals. It’s a toss up who kills Ramsay since he’s universally feared and hated.

Spoilers also hint that the war will end with Jon being declared de facto King of the North. Sansa is the only legitimate Stark, but the North is tired of all this BS and hates the King in Westeros, so the houses could declare Jon and be done.

The focus of the episode should be on the battle at Winterfell and we may see little (to no) action elsewhere. Another death predicted at the battle is Wun Wun, the loyal giant. The promo trailer shows him fighting fiercely, but he may fall.

What do you think GoT fans? Share your comments below on the action coming and be sure to tune in to CDL for a LIVE recap of ‘Game of Thrones’ Season 6 Episode 9 ‘Battle of the Bastards.’