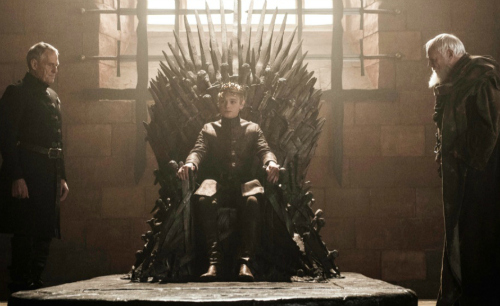 ‘Game of Thrones’ spoilers for Season 6 reveal that the bloodshed is not over and the last three episodes will have seven major deaths that no one is expecting as trouble at the Red Keep, Winterfell and Riverrun cost many lives.

Spoilers have been leaking copiously in Reddit forums and one user posted a list of 10 deaths for Season 6. So far, three of the deaths have happened as DocMantisTobogan predicted and other solid spoilers back up others still to come.

The three deaths predicted that have happened thus far are Roose Bolton (at the hands of his horrific son) plus Olly and Alliser Thorne (for engineering the stabbing “death” of the Lord Commander). This guy seems to know his stuff.

Here’s a look at the seven other deaths to expect as ‘Game of Thrones’ Season 6 comes to a horrifically bloody ending in the last three episodes.

There is only one Stark kid that will die in Season 6 so it’s a good year for the North. Poor Rickon will be hauled to the Battle of Winterfell (aka Battle of Bastards) by Ramsay Bolton (Iwon Rheon) who will set the littlest Stark running then fire arrows at him until he catches one in the back and drops dead.

Smalljon’s big part in Season 6 was handing over Rickon and Osha (Natalia Tena) to the Bolton Bastard which got Osha killed fast and Rickon killed soonish. Smalljon is not a “big” kill but looks like he’ll go down, likely in the war for Winterfell.

Defenestrate means to throw out a window – and that’s the death predicted for the King of Westeros. What’s not clear is if Tommen will jump or be pushed. One GoT theory is that Cersei Lannister (Lena Headey) will snap and burn down King’s Landing with Wildfire and that’s why he jumps…

This death is not too shocking really when you consider that he’s gay and being held in the less-than-tolerant hands of the High Sparrow (Jonathan Pryce). He could be executed by the Faith Militant – or if that crazy Cersei theory pans out, could burn to a crisp. Either way, looks like Loras is a dead man.

When Margaery slipped the little note with the rose drawing on it to Olenna Tyrell (Diana Rigg), that let us know that she’s not really into this religious stuff, she’s faking. Margaery and Loras could be killed by the Sparrows for duplicity – or there’s the crispy critter theory. We’ll see. Long live the queen (not).

Will anyone miss this guy? He’s pretty much just a storyline buzzkill. However, with so many Tyrells predicted to die at the end of the season, seems like Cersei’s Wildfire rampage theory might not be quite so unlikely. Alternately, Franken-Gregor or the Sparrows could go on a killing spree!

Poor Wun Wun. He was one of the first to side with Jon Snow (Kit Harrington) after Tormund Giantsbane (Kristofer Hivju) made the big recruitment speech about helping take back Winterfell. Reportedly, Wun Wun dies crashing the gates at the Stark family estate. Wun Wun, ye will be missed.

In addition to these deaths, there are three more suspected but not confirmed…

Brynden Tully (Clive Tully) is facing off with Jaime Lannister (Nicolaj Coster-Waldau) over Riverrun. In the books, Brynden escapes, but there has been talk that Blackfish might die in the TV version. Episode 8 spoilers show Brienne (Gwendoline Christie) in a boat near Riverrun so maybe she fishes him out.

Ramsay Bolton will reportedly be spared by Jon Snow after he defeats the Bolton Bastard and retakes Winterfell, effectively making Jon the King of the North. Spoilers hint that Jon will imprison Ramsay and not kill him but other spoilers tease that Sansa Stark (Sophie Turner) might feed her hubby to his dogs.

Neither Ramsay nor Waif would be missed, but it would be great if Blackfish survived the rout of his ancestral home since Catelyn’s Tully clan is all but gone and it would be nice if there were a few around when (and if) Lady Stoneheart turns up.

What do you thin GoT fans? Are you looking forward to a mass Tyrell housecleaning? Who will be king if Tommen’s untimely window exit plays out as predicted?

Share your comments below and check back with CDL often for more ‘Game of Thrones’ spoilers plus a LIVE recap of new episodes very Sunday night.