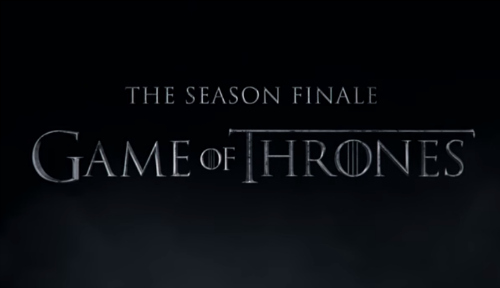 Game of Thrones spoilers for the season finale, season 6 episode 10, “The Winds of Winter” reveal that it may be winter up North, but at King’s Landing, things are heating up as Cersei, Loras and Margaery face trial and the High Sparrow may get burned.

First, if the cast credits for this episode can be trusted, we are going to see everyone – the Sand Snakes, the watchers at the wall, the Night King, the Lannisters, the Starks, Dany and her entire crew, both the Clegane boys, the Tyrells, and the Freys. It’s insane!

In King’s Landing, Loras Tyrell (Finn Jones), Cersei Lannister (Lena Heady) and Margaery Tyrell (Natalie Dormer) look like they’re all getting ready to face trial, although Margaery may be prettying up to sit at the side of King Tommen (Dean-Charles Chapman). 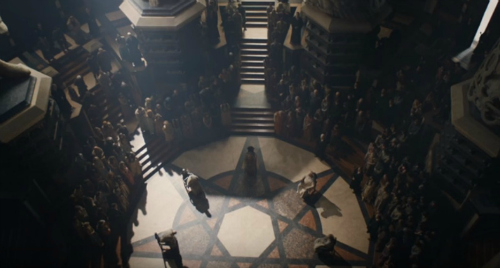 The High Sparrow (Jonathan Pryce) announces to all assembled in the Sept that the seven septas (i.e. nuns of the Faith Militant) will pass judgment. If Septa Unella (Hannah Waddingham) is the benchmark, these ladies are not the forgiving kind.

Cersei faces life in prison or death when she’s found guilty, as she knows she will be, so it’s likely that Cersei has a plan B. Will she use the wildfire caches under the city? Remember Cersei had Qyburn (Anton Lesser) use his little birds to investigate.

And if that wasn’t hint enough, Tyrion Lannister (Peter Dinklage) just told Daenerys Targaryen (Emilia Clarke) about how her insane dad King Aerys had wildfire under all the buildings in King’s Landing ready to burn down the place if he felt like it. 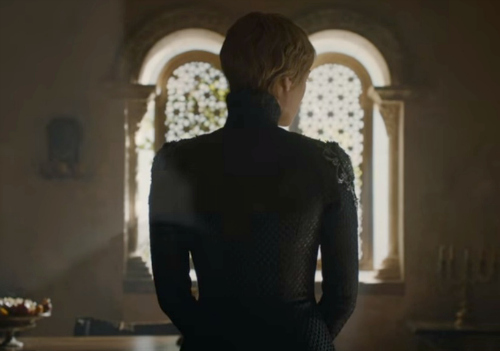 Does Cersei know about all the wildfire or just the one under the sept? Could Cersei’s henchmen unknowingly burn down all of King’s Landing? Game of Thrones spoilers reveal that Margaery and Tommen will both die.

According to GoT death spoilers, Tommen will die jumping out a window – is that to avoid the flames? Cersei wouldn’t intentionally kill her son but he could be collateral damage in her bid to destroy the Sparrows once and for all.

The GoT season finale trailer shows someone striding towards doors of the high sept – are they going to bar the doors so all inside will perish from wildfire? Will Jaime Lanniser (Nicolaj Coster-Waldau) return in time to see the flames? 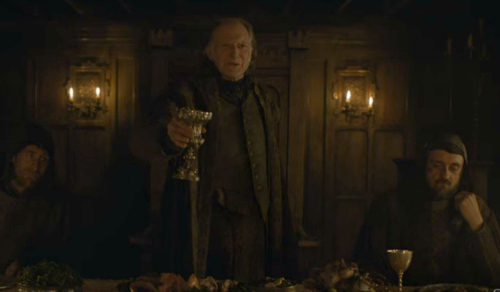 Walder Frey (David Bradley) is jubilant at the taking of Riverrun and hosts a dinner at The Twins. Ominously, Frey toasts Jamie and says “the Freys and the Lannisters send their regards.” That is close to the toast Roose made at the Red Wedding.

Roose Bolton (Michael McElhatton) said, “the Lannisters send their regards” then the slaughter commenced. Has Jaime had enough of the Freys? Will he deliver some karmic justice and take out the whole clan save one Frey daughter?

Remember Jaime promised Bronn (Jerome Flynn) a bigger castle for his loyalty? Will Bronn end up the lord of the Crossing and Riverrun? Jaime knows that the Lannisters need someone they can trust controlling the passage from North to South. 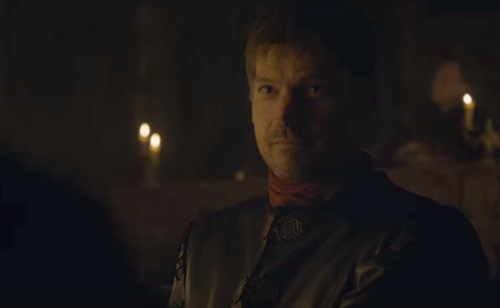 It would be thrilling if Jaime married Bronn to a Frey daughter then slaughtered the rest and walked away after having delivered a long overdue beatdown to the deadly Frey curmudgeon. Fingers crossed it goes down this way.

Up North, Jon Snow (Kit Harrington) tells Sansa Stark (Sophie Turner) that they must trust each other since they have so many enemies and as far as they know, there are no more Starks left alive. Brother and sister bond.

But then later, Petyr Baelish (Aidan Gillen) comes to collect from Sansa what he sees as his due. He helped her save her family home and now that she’s a widow, he wants her. But will Sansa give in to Littlefinger’s creepy advances? 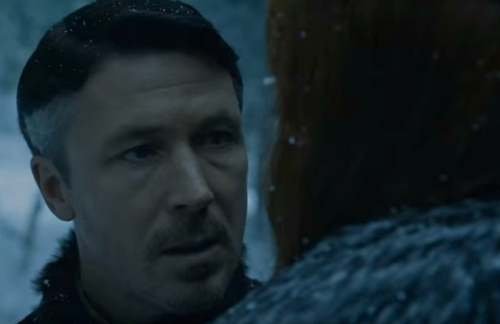 Although it makes the skin crawl to consider, there’s one reason she might. If Sansa is pregnant, as Game of Thrones spoilers have teased all season long, will she hook up with Littlefinger?

A baby presumed to be a Baelish is far better than a Bolton baby in her womb. Littlefinger would agree to pretend the child is his in a heartbeat. He loves her because he loved her mom and the whole thing is gross, but that’s GoT for you.

Also up North, Jon has a showdown with the Red Lady. Davos Seaworth (Liam Cunningham) tells Melisandre (Carice van Houten) to come clean to Jon about burning Shireen alive. Melisandre will admit it and Jon will be disgusted. 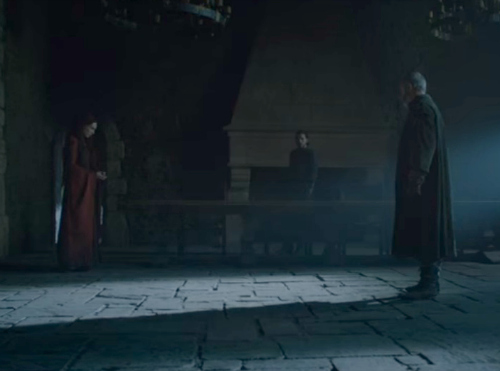 Bran Stark (Isaac Wright) is dropped off at the Wall by Benjen Stark (Joseph Mawle). He should take the kid to Winterfell, but some GoT spoilers tease that Benjen can’t cross the wall or he’ll break some magical barrier there.

Other spoilers tease that we’ll finally see the truth about Jon’s parentage come out at a Tower of Joy flashback. Other GoT rumors speculate that the High Sparrow is really Howland Reed (Leo Woodruff in flashbacks).

If so, then the Sparrow knows that Jon is entitled to sit the Iron Throne as a Targaryen male. But if the Sparrow gets burned to a crisp, the only witness left could be gone. There’s also action over in Meereen in the finale. 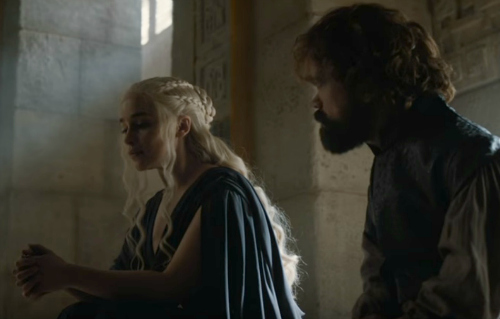 Daario Naharis (Michiel Huisman) and Dany share a tender moment, and she strategizes with Tyrion. She’s got ships and is contemplating the move to take Westeros. Daenerys is worried and Tyrion says that’s a good sign.

Tyrion tells Dany that she’s about to make the move into the great game (i.e. the Game of Thrones) and tells her it’s terrifying and it’s good that she’s afraid. While many are hoping that Dany will attack King’s Landing in the finale, that’s doubtful.

With the Sand Snakes listed in the credits, we also wonder whether the new lady rulers of Dorne might come and offer an alliance with Daenerys, otherwise, why have them in the episode? We’ll see if they show or not.

This will be an oversized nearly 70-minute finale episode and it looks like there’s lots of action to come. Be sure to check back with CDL for a LIVE recap on Sunday, June 26 of the Game of Thrones finale.