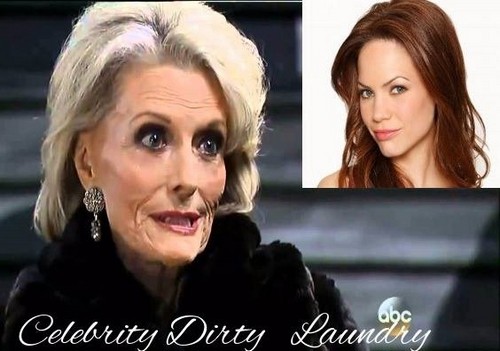 “General Hospital” (GH) spoilers reveal that Liz Webber (Rebecca Herbst) will be surprised that she’s included in the reading of Helena Cassadine’s (Constance Towers) will on this week’s episodes – and even more shocked by what she hears at the big event.

When Liz gets an invite, General Hospital spoilers tease that she may assume it’s about her ties to the Spencers since Helena loves/hates Luke Spencer (Anthony Geary) and has kidnapped Lucky Spencer (Jonathan Jackson) in the past. But, of course, it’s all about little Jake Spencer (James Nigbor).

GH spoilers indicate that Helena will impart symbolic parting gifts to each of her beneficiaries (i.e. victims of her last gambit). So what will Liz be given? Perhaps a calendar with a few years missing? Perhaps a little toy that Jake had as a small child?

There are a couple of ways this can go. GH spoilers fans have theorized that little Jake is not really the little Jake that Liz gave birth to. Some believe that he’s some sort of wicked Cassadine clone or just someone the right age to play the part.

However, they did DNA match him – but if Helena did a bone marrow transplant from dying Jake to some spare kid she had lying around, she could have created a DNA blood match (it happened with Ava, remember?). And with Helena, anything is possible since she freezes people, etc.

Alternately little Jake is really little Jake and he’s been missing and with Helena all these years. No matter what went down, Liz now has a child in her possession that was with Helena for years whether he’s her biological son or not…

So either way, as a result of what comes out of the will reading, Liz will finally dig into what happened to Jake while he was on Cassadine Island. This is a question that’s long overdue for answers. When Jake first came back, Liz was dealing with her Jake Doe secret.

She was so focused on keeping Jason Morgan (Billy Miller) in the dark that she didn’t pursue Jake’s missing history. But now that Jake is healing up from his latest misadventure and Jason is back in the arms of wife Sam Morgan (Kelly Monaco), Liz has time to mull it over.

Liz will want to know the truth and will go searching for information – but GH spoilers indicate Liz will find surprising answers that are not what she expects. What do you think GH fans? Do you think Jake is really Jake? Or is there some biological twist coming thanks to Helena’s shady schemes?