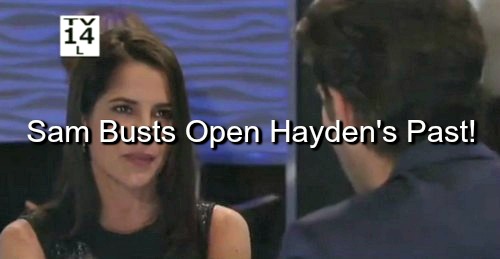 “General Hospital” (GH) spoilers indicate that the Monday, March 7 episode next week could see a legacy marriage end and a new one begin. Tracy’s health takes a turn for the worse as Sam digs into the past of Hayden who is busy distracting Nikolas. Here’s what to expect.

First, Hayden Barnes (Rebecca Budig) is clueless that Nikolas Cassadine (Tyler Christopher) has his cousin Sam Morgan (Kelly Monaco) investigating her. Sam follows up on a lead and gets together with Baxter Corbin (Tom Parker) to start her search for the truth.

Sam is direct with Baxter about what she wants but it looks like he’ll hedge – is he loyal to Rachel – or does he think he can use this investigation to profit from her? General Hospital spoilers tease that Sam will get some info out of the wily guy that will keep her investigation moving forward.

Over at Wyndemere, Nikolas wants to know why Hayden was with Tracy Quartermaine (Jane Elliot) at the Rib when she seized out. What fibs will Hayden tell Nik to evade the truth of the matter? Nikolas wonders why she gives a damn about the woman trying to take ELQ from him.

Hayden pacifies Nikolas with a bedtime story about her past and tells him something about her father. But is this the real deal or more of Hayden’s lies? No way is Hayden going to come clean on her Rachel past, right? We’ll see…

Speaking of Tracy, she’s being a demanding patient over at GH. Looks like Dr Matthew Mayes (Matt Riedy) has her MRI results and Dr Griffin Munro (Matt Cohen) and Monica Quartermaine (Leslie Charleson) are on hand for the reveal.

GH spoilers tell us that Tracy demands to know what the tests say so she can check out and go home. Mayes thinks she has a brain tumor that could indicate cancer. Griffin disagrees with Dr Doom and thinks her test results are more complicated. Either way, Tracy can’t go home.

Will Lulu Spencer (Emme Rylan) and Dante Falconeri (Dominic Zamprogna) pick up the pieces of their shattered marriage and give it another go? Lulu ignored Dante’s invitation to bring Rocco and come back home after her near-death incident, but she’s had a change of heart.

Maxie Jones’ (Kirsten Storms) advice and the reality of their divorce decree there in black and white has made her see the light. Lulu asks if they can start again. Dante will be thrilled. Will they tear up the divorce docs and stay married?

Or will they do something romantic and decide to start from scratch and rebuild their relationship and get married again later? Either way, Dante and Lulu are back on and GH spoilers fans will cheer at the prospect of them putting their misery behind them.

But will Dante’s dad get bad news about his own marriage? Sonny Corinthos (Maurice Benard) and Carly Corinthos (Laura Wright) have a tense conversation about the state of their union. Sonny knows Carly is upset about the mob mess and the fallout.

They just had to institutionalize Morgan Corinthos (Bryan Craig) because of this debacle, but that situation was brewing before the gun running shoot out. For Carly, it’s more about Sonny’s wheelchair lie.

Sonny put the chance to make a power play on his enemies above trusting and confiding in her. Sonny wants to know if Carly’s going to walk out and she advises him that he should not ask that right now since she’s really reconsidering their relationship.

Will they sleep on it and see if things look better tomorrow? Or is Sonny in one of his self-destructive moods and will push Carly until she leaves him because that’s what he thinks he deserves? With these two, there’s no telling.

Tune in for the Monday March 7 GH episode and then come back to CDL for more “General Hospital” spoilers, news and more.