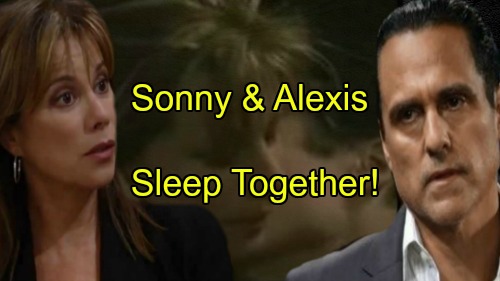 General Hospital (GH) spoilers warn us to expect some major infidelity between two Port Charles residents who are wracked with guilt and on the outs with their respective mate. Alexis Davis (Nancy Lee Grahn) has been drowning her sorrows in the bottle, ever since her husband, Julian Jerome (William DeVry) has attempted to kill her, ending her version of a fairytale marriage.

Alexis was in the process of ending things with Julian, once she had learned he chose to continue his illegal dealings as a murdering mobster.

The funny thing with Alexis, is that she has this ‘type’ of man in her mind, that truly doesn’t exist. Her track record shows that she loves “bad boys”, including Jerry Jacks (Sebestian Roche), Shawn Butler (Sean Blakemore), and Ric Lansing (Rick Hearst).

Alexis clearly prefers gangsters over businessmen, like Jasper “Jax” Jacks (Ingo Rademacher). Alexis and Jax chemistry and their love for each other is undeniable, so why not be with him?

General Hospital spoilers reveal that Alexis is going to find comfort in an old familiar place, in the arms of Sonny Corinthos (Maurice Benard).

Sonny has been mourning the death of his boy, Morgan Corinthos (Bryan Craig) while struggling with his own guilt on whether he killed his own son or not – meanwhile he’s been hitting the bottle too and that is a no-no for someone taking bipolar medication. His wife, Carly (Laura Wright) walked out on him leaving him in a vulnerable, depressive state.

Recently, Alexis and Sonny met at the Haunted Star, and were sharing drinks together. GH fans recall that when Sonny informed her that Ava Jerome (Maura West) and Scott Baldwin (Kin Shriner) were inside, she chose to offer her condolences and leave.

But before Alexis left, she shared a very tender and telling moment with Sonny. Alexis and Sonny have a sordid history and if GH sources are correct, this may be gearing up for a repeat performance – and why not?

General Hospital spoilers show Alexis is still filled with hatred and resentment towards Julian for everything he has done to her and her family – as well as random other people he has murdered. Sonny is on the same page when it comes to Julian.

Morgan allegedly died after stealing a car with a bomb attached to it, meant for Julian – what better way to drown guilt and get revenge than to sleep with the woman Julian still loves and is determined to win back?

This sexual reconnection between old lovers is going to be epic in coming weeks. Can we expect something as hot and bothered as Sonny and Ava’s classic Crypt Sex?

GH fans who know the show well know that Alexis is at an all time weak point for a lot of men in and around Port Charles and with Sonny technically given a free pass by Carly’s separation, anything is possible.