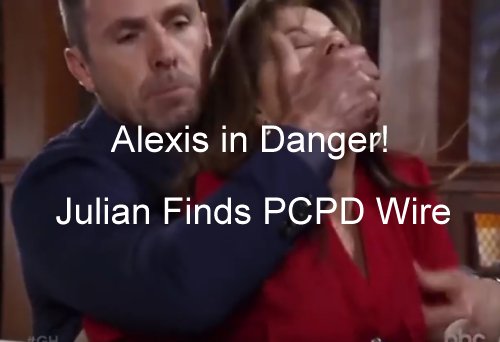 General Hospital (GH) spoilers from a new ABC video show that Alexis Davis (Nancy Grahn) may be in over her head with Julian Jerome (William deVry) and this scheme to wear a wire to get a confession could put her in danger – and also not work out as planned.

Anna Devane (Finola Hughes) and Alexis seem to be relying on a false premise – that Julian won’t hurt Alexis, no matter what. But that dynamic may change based on two factors. If Julian realizes that Alexis is trying to send him to jail, that will change things.

Also, if Julian discovers that Alexis isn’t pregnant, that will push him further. General Hospital spoilers video shows Julian grabbing Alexis and slapping his hand over her mouth. While it looks like he’s assaulting her, it might be something else.

Alexis and Julian are known for their rough romance when they get sexy together. Is Julian making a move to seduce Alexis – or does Julian realize something else is going on and stops her from talking? Either way, Alexis will need to shut it down.

When Julian comes over at Alexis’ request, she will say she’s going to jail for his crime. Alexis will say specific things to try and lure Julian into admitting the murder. Julian, though, has a solution and says she doesn’t have to go to jail.

Perhaps Julian has worked out a way to pin the crime on someone else or get her acquitted, and then Alexis will scramble to redirect the conversation to his guilt. Alexis will encourage him to confess to the PCPD and save her and their “baby.”

Little does Julian know, if he admits to stabbing Carlos in his living room, he might as well be saying it in court because of the wire. But no matter what she says, General Hospital spoilers indicate Julian won’t say what Alexis wants to hear.

Paul Hornsby (Richard Burgi) and Jordan Ashford (Vinessa Antoine), along with Anna, are all listening in on the wire from a nearby van. They will be equally frustrated when Alexis struggles to get Julian to say the three little words they need of “I killed Carlos.”

The video also shows Alexis holding the wire in her hand while Julian is beside her. Will Julian discover the wire? If so, all bets are off. Julian may doubt everything Alexis is saying. He hasn’t survived this long without ending up in jail more often.

Remember the only time Julian was sent up the river was for a false confession to Anthony Zacchara. If Julian notices the giant wire that Alexis is wearing, she should NOT be in immediate danger. After all, no way will Julian hurt her when there are cops listening in.

But Julian might change the dynamic to give them audio they don’t want to hear. Whether it’s Julian making a move on Alexis – or further implicating her forthe crime – isn’t clear from the GH promo video.

General Hospital spoilers reveal that when Alexis can’t get Julian to take the bait and confess, she’ll have to go further. At the end of the encounter, Alexis will be scared. She needs to keep herself out of jail – while also keeping herself out of danger.

The baby lie is key in all of this. Alexis will need to get Julian to believe what she’s saying and needs to buy more time. Julian will realize this week that things are closing in on him and he considers leaving town.

Can Alexis keep him close long enough to get a confession? Will Julian find the wire and take drastic steps to shut down Alexis’ efforts to entrap him? Just how far will Julian go – and how far will Alexis go to nail Julian?

And if the PCPD can’t take down Julian, General Hospital spoilers tease that Sonny Corinthos (Maurice Benard) may take matters into his own hands. A leaked GH script indicates that Julian is in the hospital – will Sonny shoot him?

What do you think GH fans? Will Alexis be in danger because she’s wearing a wire? Can Julian avoid the trap that’s been set for him? Is there any chance for Julian to win Alexis back – and how long can this baby lie persist?

We’ll found out answers to all of this soon on the ABC soap. Be sure to come back to CDL often for all the latest General Hospital spoilers and news!