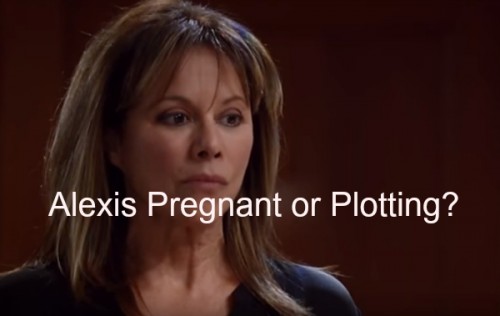 General Hospital (GH) spoilers tease that Alexis Davis (Nancy Grahn) may be fibbing about this pregnancy news – either that or she may be fooling herself. Is Alexis pregnant with Julian Jerome’s (William deVry) child or is this a plan to trap her husband into a confession?

Alexis made a couple of comments about being sick to her stomach, but that could have just been her laying the groundwork for this pregnancy con. General Hospital spoilers reveal that Alexis will go to any lengths to manipulate Julian into confessing or turning himself in for killing Carlos.

Certainly Julian and Alexis have been busy in the bedroom, so it’s not out of the realm of possibility that she’s preggers. But isn’t the pregnancy trope overdone? Plus, Julian just had a baby… Does Alexis really need another gangster offspring? This seems highly unlikely, but you never know.

#2 Alexis is not pregnant and is scamming Julian

Alexis may think she has to pull out all the stops and entrap Julian. Since recording him confessing didn’t work, maybe she thinks she can pull at his heart strings and get him to do the right thing because he thinks she’ll be pregnant and locked up for a murder he committed. This seems possible. 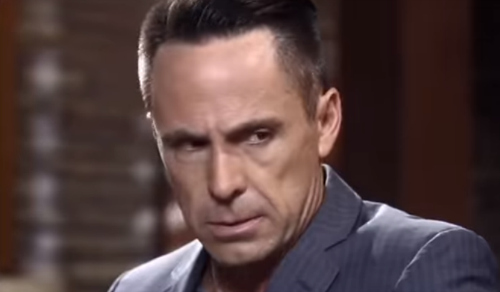 Perhaps Alexis really thinks she is pregnant but something else is going on – like maybe her cancer is back. Alexis could be having lung cancer symptoms which can include nausea and vomiting. The question is, would Julian sympathize and save her if she was sick – or only if she was pregnant?

#4 Alexis is having more menopause issues

Remember in 2011, there was an Alexis menopause storyline? Let’s hope the GH writers did NOT forget. There is realistically no way that Alexis should be pregnant based on her medical history. That’s part of her character history. So maybe it’s more menopause issues – no way should she be fertile.

This could be something that Anna Devane (Finola Hughes) and Diane Miller (Carolyn Hennesy) cooked up with Alexis as a scheme to nail Julian. That seems like a real possibility (and better than an unlikely pregnancy). But is Sonny Corinthos (Maurice Benard) in on it?

When Alexis told Sonny that he had something to tell him, did she tell him she’s pregnant – or did she ask him to lie and tell Julian that she’s pregnant to try and manipulate him into her trap? General Hospital spoilers tease that Sonny will pitch in to help nail Julian for killing Carlos. 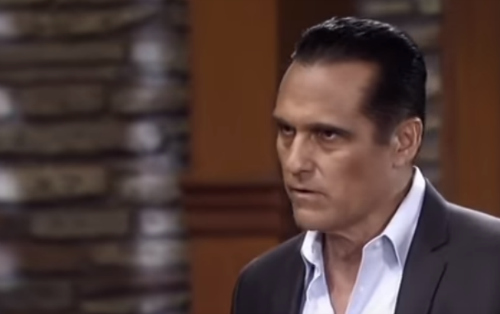 If Alexis is pregnant, it would be a medical miracle and, let’s not forget, she guzzles wine like it’s water. It’s not that women that age can’t get pregnant – but factor in her known menopause around which a major story was written five years ago, and Alexis should not be able to make a baby…

So what do you think GH fans? Do you think there’s a chance Alexis could be pregnant? Is she lying to trap Julian? Or is something medically wrong with Alexis and she’s facing a real health crisis? Where do you think this is going?