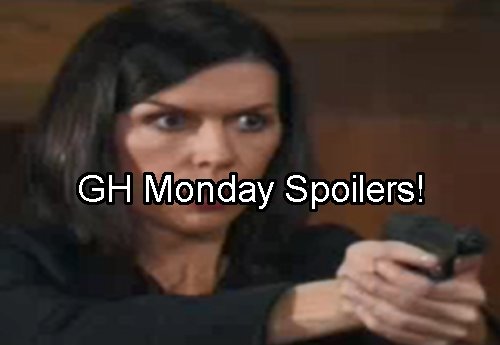 New General Hospital (GH) spoilers for the Monday, October 3 episode reveal that things are moving fast at GH after its closure, Tracy’s life is at stake in a Paul vs Anna showdown, Scotty tells Ava he knows who’s the GH killer, and Dillon begs for mercy.

Paul Hornsby (Richard Burgi) has a needle to Tracy Quartermaine’s (Jane Elliot) neck and challenges Anna Devane (Finola Hughes) who seems ready to shoot but can she hit the GH killer without harming Tracy and do it in time to stop Paul? 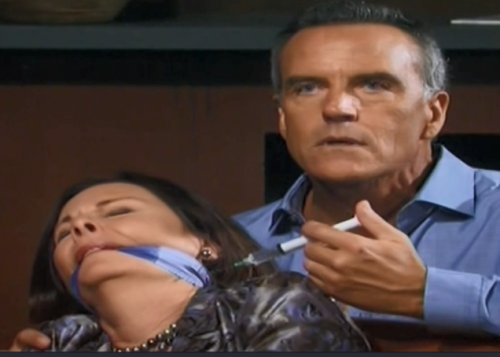 Everything looks grim. Dillon Quartermaine (Robert Watkins) begs his father to stop and says he’ll have to kill him too if he tries to take his mom’s life. It’s all over for Paul – the one question remaining is whether he takes a bullet, ends up in a body bag, or goes in handcuffs.

It looks like it’s too late for GH, though, because of Paul’s reign of terror. Hayden Barnes (Rebecca Budig) and Hamilton Finn (Michael Easton) are creeping around the closed hospital, probably to get some of his research materials, when they hear something disturbing. 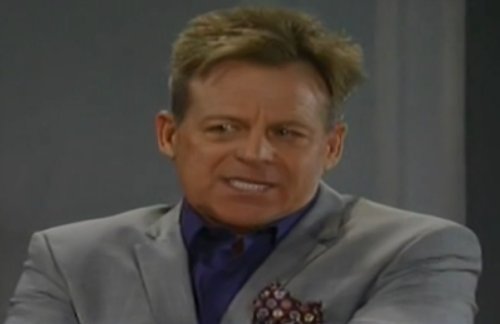 Lucy Coe (Lynn Herring) is there chatting with a man assessing the property for sale. Lucy is shocked and says she had no idea the board was planning to sell GH. Hayden and Finn are even more stunned and they’ll soon spread this startling news.

Morgan Corinthos (Bryan Craig) is spinning out over the surety that he’s facing dire consequences at school for cheating on his term paper and he goes to Andre Maddox (Anthony Montgomery) for a much-needed therapy session. 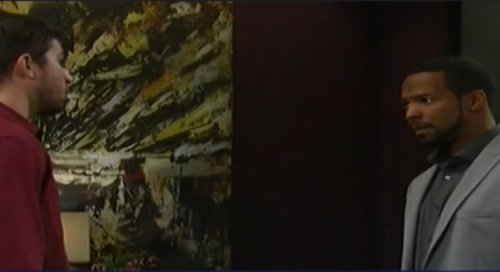 Morgan opens up to Andre about a lot of things plaguing him – but not everything – and then tells Andre that he knows he’s spinning out but does NOT want to go back to the mental hospital. Morgan threatens Andre that he will run away before he goes back there.

Kiki Jerome (Hayley Erin) is tired of Morgan’s sniping and erratic behavior. She confesses to Franco (Roger Howarth) that she’s not sure if she can continue to be with Morgan if he’s going to be this much of a source of stress for her. Franco offers words of wisdom. 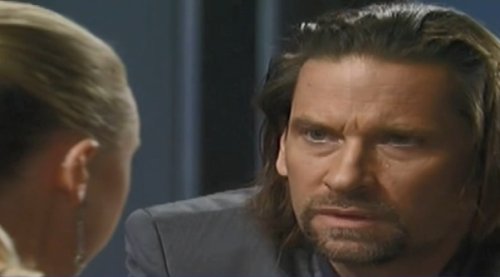 As Anna faces off with Paul, Scotty Baldwin (Kin Shriner) tells Ava Jerome (Maura West) he knows who the prime suspect is in the GH killer case. Was Scotty down at the PCPD and heard Jordan Ashford (Vinessa Antoine) sending a team to Paul’s hotel room?

How much does Scotty know? Ava is stunned because she knows that Paul still has her recorded confession tucked away somewhere and doesn’t want the cops to stumble across it while gathering evidence. Will Ava take action or just wait and hope for the best?

Lots to see as the GH serial killer case reaches its conclusion on the Monday, October 3 episode of GH. Perhaps Paul will finally explain why he targeted Bobbie Spencer (Jacklyn Zeman). GH fans want to know how they’re going to tie up this improbable and erratic storyline!

Share your comments below on all the spoilers for Monday’s GH and be sure to check back with CDL often for all the latest General Hospital spoilers and news.