General Hospital (GH) Spoilers: Anna and Sonny Team Up to Take Down Carlos and Julian 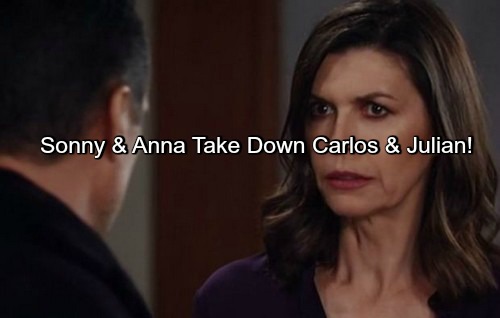 Sonny Corinthos (Maurice Benard) has interests aligned almost identically to Anna’s in this matter, so it would make sense if the two teamed up. Anna could put her law enforcement sources to work looking for Carlos while Sonny puts out feelers in the criminal underworld.

It seems like together, they’d have it covered. Before, Sonny just wanted to take out Carlos in cold blood for vengeance, but Anna now seems to have him convinced that bringing Carlos in to testify against Julian would be a far more satisfying outcome.

General Hospital spoilers ask if it’s Sonny that Anna works with? So what about Paul Hornsby (Richard Burgi)? Paul is someone that Anna just can’t trust. GH fans know he’s been talking to Carlos behind her back and lying about it – the only reason Carlos is still gone is because of Paul.

Anna feels that Paul has an agenda working that she’s not clear on because he’s a known liar who works only towards his best interests. And if Paul’s best interests don’t align with law and order, that’s just too bad.

So while Anna may pay lip service to working with Paul, choosing Sonny as a partner she can trust makes more sense. Anna doesn’t truly trust Sonny but she at least knows they have the same end goal in mind so it’s a functional relationship for this one cause.

Also, if Anna can bring Carlos in while Paul fails to deliver that will teach the dirty DA a lesson and make him look bad to Jordan Ashford (Vinessa Antoine) and the whole PCPD. Paul has played Anna for a fool too many times for her to trust him.

Plus there was the whole thing where he flirted with her and creeped Anna out in a big way. Paul will not be able to finagle Anna into his bed the way he did Ava Jerome (Maura West). We do know that an episode this soming week, Sonny will have a mob tech guy bug someone’s phone.

GH spoilers tease that it’s likely Julian’s phone he has bugged because then Sonny will tell Julian he knows that Carlos is alive. Sonny is likely hoping Julian will reach out to Carlos and they can track the hit man down.

But will Paul figure out that Anna is working with Port Chuck’s top mobster instead of him? Will Julian fall for Sonny’s manipulation and reach out to Carlos? Will Carlos come back on his own or will it be Paul, Anna or Sonny that brings him in?

What do you think GH fans? Do you think Anna and Sonny are a good match when it comes to pursuing justice for Duke? And could Griffin Munro (Matt Cohen) play a role in this scenario? Share your comments below and come back to CDL often for more “General Hospital” spoilers and news.