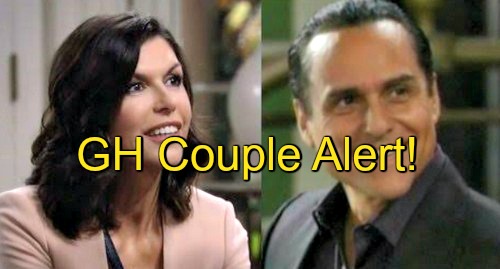 “General Hospital” (GH) spoilers are teasing a split for Sonny Corinthos (Maurice Benard) and his wife – and the possibility of new romance is on a slow burn for this week’s episodes. GH spoilers hint that by summer, we’ll see Sonny and Anna Devane (Finola Hughes) as Port Charles newest couple.

While at a glance this seems improbable, not only are GH showrunners laying the groundwork for these two coupling up – but it makes sense given some key facts about Anna when it comes to her take on crime, dangerous men, and the state of her life.

First, Anna is drawn to dangerous men. Even mostly law abiding Robert Scorpio (Tristan Rogers) is dangerous and love of her life Duke Lavery (Ian Buchanan) was a known mobster when she got involved with him. Anna likes bad boys whether they be spies or mob men.

Second, Anna has crossed the line many times when it comes to the law. Anna can’t criticize anyone for their violent tendencies when she held Cesar Faison (Anders Hove) captive and then emptied a magazine of bullets into Carlos Rivera (Jeffrey V Parise). This is a big shift for her.

Third, Anna is alone and lonely. She’s completely alone in Port Chuck except for friends and needs someone in her life. Granted Sonny has a wife, but it looks like Carly Corinthos (Laura Wright) will soon gravitate towards Hamilton Finn (Michael Easton) based on recent spoilers.

Fourth, Anna and Sonny are working together towards the goal of avenging Duke. This has them seeing eye-to-eye and working hand-in-hand. Both have rejected involving anyone else and they are together in this pursuit trusting one another and having each other’s back.

Finally, General Hospital spoilers say Anna will make a major move on their flight to Ecuador on this week’s Monday episode. She will open up to Sonny about gunning down Carlos. Anna will do this for a couple of reasons. She wants Sonny to know she’s willing to do whatever it takes and she wants him to know they’re on equal footing.

There are two other men in Port Charles that have their eye on Anna for possible romance. Paul Hornsby (Richard Burgi) has made it clear he wants her and Andre Maddox (Anthony Montgomery) is clearly closer to Anna than a doctor and patient should be.

The problem with Paul is not that he’s a bad guy (although he is) but that he’s inconsistent and therefore untrustworthy. Anna knows what to expect from Sonny so he’s reliable. Andre, however, is someone Anna sees as too good for her now that her hands are irrevocably dirty.

General Hospital fans think Sonny and Anna would be a compelling pair to see come to fruition. And what makes this even more interesting is the dynamic between the two of them with Griffin Munro (Matt Cohen) since both are bonding with the doc and all three share love for Duke.

Plus, Anna’s daughter Robin Scorpio (Kimberly McCullough) and granddaughter Emma Drake (Brooklyn Silzer) would have no issue with Anna getting involved with Sonny since both like him. The main obstacle to a Sonny-Anna romance is Carly and GH spoilers hint she’ll be out of the way soon.

While Anna and Sonny are in Ecuador chasing Carlos, Carly will get close to Finn when she helps him out of a jam. We already saw some flirtation between the lizard-loving doctor and Carly, but this will deepen and a real bond will form between them that will turn to romance.

We knew GH showrunners wouldn’t allow Carly and Sonny to have a happy ending with marriage number five. On the ABC soap, no couple gets to enjoy wedded bliss for long. Look what they did to Lulu and Dante – and what the writers are now doing to Maxie and Nathan.

It’s inevitable that Sonny and Carly will split and new GH spoilers reveal who they’ll turn to for love once they do. What do you think GH fans? Do you think Anna and Sonny will make a hot new couple? What do you think about their chemistry?