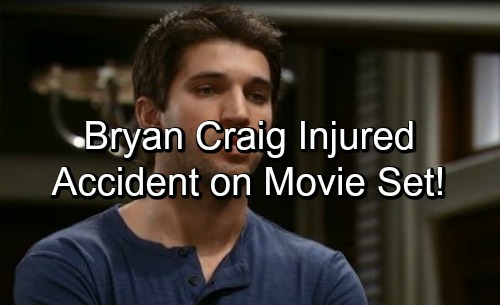 Hot new General Hospital (GH) spoilers reveal that ex-Morgan Corinthos actor Bryan Craig has injured his leg and may need surgery.  Last night on SnapChat, the actor showed off his leg in a cast and says he may have “broken” a ligament.

The actor also showed off his injured limb with a frozen bag of corn on it and commented that he and fiancée Kelly Thiebaud (former Britt Westbourne) didn’t have ice packs in the house to put on his achy foot. Bryan promised fans a follow-up to let them know if his leg was seriously injured.

What a great movie it was ;) @chasehawk we miss ya buddy. @dommyriddle @lablaker drinks soon, like within the next few days actually #Ridemovie

Bryan has been posting set photos from “Ride” often and it’s likely this injury was from BMX stunts and action from the movie which is based on the true-life story of BMX legend John Buultjens. Bryan updated fans a couple of hours ago via Snapchat on what’s going on with his foot and his family.

His fiancée, Kelly Thiebaud, has been very sick for the past few days and she may not be up to helping Bryan deal with his injury. Bryan is in a walking cast and did another Snapchat story with himself and his mom at Outback Steakhouse saying he’s treating her to dinner for helping him while his foot is in pain.

There’s still no word of whether Bryan will need surgery but the good news is, he’s mobile. Bryan’s role in Ride is as Jack, another BMX rider who was a contemporary of Buultjens back in the 80s. Bryan debuted his shaved head on Instagram with a handkerchief covering his handsome face.

Ride has wrapped shooting, so perhaps Bryan rode a little hard on his last day on the set with co-star Ludacris. He shared a wrap photo of him with the director and producer. Of course, Bryan might have hurt himself off the set of the movie since he also recently shared a video on Instagram of him skateboarding and doing tricks.

Got back on the board, it’s been a long time. Video and edit: @dommyriddle

Bryan’s most recent photo was a throwback pic of him in a suit with his glorious head of brunette hair with the caption “Hair come back to me.” Perhaps while Bryan is recuperating from his foot and leg injury, his locks will grow back in so he’ll look more like his old self.

GH just held the funeral so the Corinthos family could lay Morgan Corinthos to rest although it was a memorial service, not a funeral since no body was found. A recast of Morgan seemed inevitable from the moment Bryan Craig announced he’d broken his contract, but fans are divided on this issue.

Best wishes to Bryan Craig! Let’s hope since he’s up, around, and out to dinner with his mom that he’s on the mend and won’t need surgery. Stay tuned to CDL for the latest General Hospital spoilers and news.

Hair come back to me