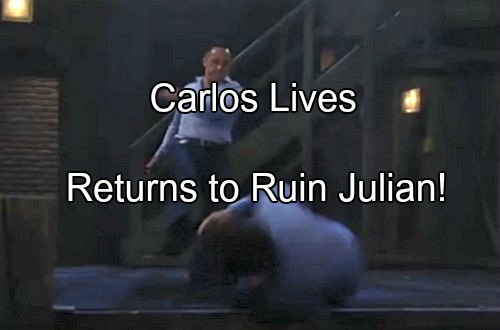 “General Hospital” (GH) spoilers tease that Carlos Rivera (Jeffrey V Parise) will not die from the stab wound Julian Jerome (William DeVry) inflicted on him and it will be someone totally unexpected that saves Carlos from a watery grave.

There have been persistent GH spoilers that Julian will be arrested at the Nurse’s Ball, but with Carlos seemingly dead, how would that happen? Carlos’ testimony is vital to a case against Julian so if he dies, it seems like there will be no justice for Duke Lavery (Ian Buchanan).

Turns out Michael Quartermaine (Chad Duell) may play into Carlos’ life or death struggle. General Hospital spoilers indicate Michael will save someone’s life but it’s not someone he wants to help. Aside from Julian, Michael doesn’t hate a lot of people – but Carlos is a notable exception.

Michael will get a message that seems to be from Sabrina Santiago (Teresa Castillo) but may, in fact, be from Carlos to lure Michael to Carlos’ location so he can help him. Carlos is in bad shape – he’s been stabbed and kicked into the harbor by Julian.

Carlos has no friends left in town but he has something that Michael wants – Sabrina’s location. GH spoilers hint that Carlos may text Michael with a message that indicates Sabrina is in danger and needs him and that brings Michael running.

Will Paul Hornsby (Richard Burgi) play into this? Now that Carlos knows Julian can’t be trusted, he will have no problem flipping on him, but the PCPD has to keep Carlos alive long enough to testify. Also, we have to wonder about the Cassadine dagger.

Julian held onto it after he stabbed Julian and he has to take it home or else Alexis Davis (Nancy L Grahn) will know it’s missing. Even if Julian wipes it clean, though, it seems like there will be some trace evidence left. That means the murder weapon will still be around.

When Julian is arrested at the Nurse’s Ball, will that dagger serve as evidence that he tried to kill Carlos? Will Julian be arrested for ordering the hit on Duke as well as Carlos’ attempted murder? Is Julian going down for good or can the wiley mobster get out of this pinch too?

What do you think GH fans? Do you think Michael would save Carlos if it meant he could get Sabrina back? Will Michael stash Carlos away? Alert Paul? How can they keep the secret that Carlos is alive long enough to get Julian behind bars?