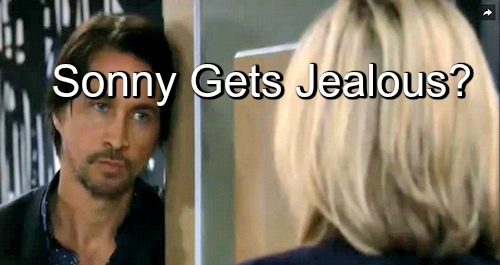 “General Hospital” (GH) spoilers reveal that Carly Corinthos (Laura Wright) will provide a valuable service to Dr Finn Hamilton (Michael Easton) on this week’s episodes. This will deepen their already blossoming connection and set the stage for romance. Her interaction with Finn will enrage Sonny Corinthos (Maurice Benard).

Last we saw Finn, he was out of control in the GH locker room and trying to get a fix of that drug he’s been shooting up – but then Dr Griffin Munro (Matt Cohen) interrupted him so he couldn’t get what he needed. Finn endured the small talk then rushed away.

We’ll see Finn rush to the MetroCourt to get what he needs, but his condition will worsen as he tries to make it to his room. Looks like Carly will find Finn struggling and help him get to his room. She’s got no problem being intrusive, so she’ll be a busybody and insist on helping.

General Hospital spoilers say that by the time Finn makes it to his room, will he be so desperate that he asks Carly to hand him his drug kit? This is a big moment – it’s Finn letting Carly in on something that he’s obviously hiding from everyone else in the world. Could he be so out of it that he needs Carly to give him the shot?

That yellow stuff he’s shooting up looks odd – we’re wondering if there is more to Finn’s relationship with Roxie than we originally thought. Is she more than just a “service” lizard and she’s really a lifesaver? Is she his medication?

Does Finn extract something from Roxie to treat his medical condition? In most cases, a bearded dragon bite won’t kill you, but scientists have found it has some shared components with rattlesnake venom – recent research indicates they may have evolved from a common ancestor.

Many animal venoms are used to treat chronic conditions – anything from cancer to autoimmune disorders to nervous systems problems and even conditions of the brain. Did Roxie bite Finn when they met in the bush and he realized he was healthier after she nibbled him?

From there, it would be easy enough for Finn to figure out how to extract venom from Roxie without hurting her. Specialists extract venom from rattlesnakes and other creatures to help with research and it’s no big deal. That could be why Roxie has to be with Finn at all times.

Is Roxie a scaly slithering personal pharmacy for Finn? Looks like Finn will lay out the medical story for Carly but it’s doubtful he’ll reveal his backstory and why he came to Port Charles. We’ve got fingers crossed he’s Valentin Cassadine, but that remains to be seen.

General Hospital spoilers tease that Carly and Finn will bond over the experience of her helping him and this opens the door to more between them. Carly is already struggling with Sonny ignoring her wishes and plunging head long into violent situations again and again like with his relentless pursuit of Carlos.

And yes, Carly does love Sonny, but she told him she can’t watch him be hurt again and reminded him how scared she was when he was shot. Carly might break up with Sonny not because she DOESN’T love him, but because she loves him too much.

Plus, there’s an appeal in the stark differences between Sonny and Finn – at least on the surface – deep down, they may be more alike than she imagines. Sonny never needs Carly’s help and if he is in a position of weakness, he gets angry and pushes everyone away, including her.

Finn, on the other hand, because he’s got an illness, could use a caretaker and Carly might really dig the chance to be in a position where she’s truly needed. But don’t expect Carly to jump into a romance with Finn right away.

This will be a slow build that will be helped by Sonny ordering Carly to avoid Finn – as he did when he found out she was getting close with Jake Doe before he realized he was really Jason Morgan (Billy Miller). And if Sonny finds out Finn is shooting up, he’ll assume it’s a street drug and will hate that.

If Sonny pushes Carly too hard about Finn while Sonny continues to keep secrets from her, that could be the catalyst that moves Carly towards Finn. Plus, if Finn is NOT a Cassadine, there’s a chance he’s an old mob enemy of Jason and Sonny’s.

GH spoilers indicate someone comes to Port Charles for revenge against Jason and Finn’s plotline is that he’s in town for revenge. If it’s not revenge against a Cassadine, it could be against one of the mobsters. Either way, though, Finn and Carly seem destined to dance.

What do you think GH fans? Is Finn shooting up Roxie venom to treat a malady? How much will Finn open up to Carly after she comes to his rescue? Share your comments below and come back to CDL often for more “General Hospital” spoilers and news.