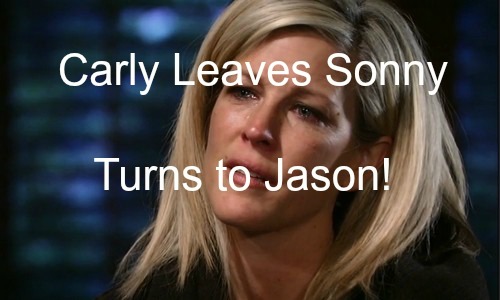 Now as we all know, when Carly walks out on Sonny, it’s through a revolving door – she always, always comes back. However, there is the slim chance that Carly could break loose for good after all the tragedies that she and kids have paid for his mob life.

General Hospital spoilers say Carly tells Sonny that loving him is brilliant and dangerous and then admits that she likes the power but says the kids always pay the cost. She’ll mention Michael Quartermaine (Chad Duell) being shot in the head then beating his step-mom Claudia to death to save her.

Sonny will tell her he’d change the past if he could – and that’s the key. He can’t – but Sonny could change the future. As far as anyone knows, Julian Jerome (William deVry) got out of the mob and is living a happy life with Alexis Davis (Nancy Lee Grahn).

That’s what Carly wants – Sonny with her but out of the mob. But Sonny has made it plain he can’t get out. And, as CDL GH spoilers predict,  what’s likely is that Julian is not out either – he’s just selling a very deep lie and is living a fabricated existence for now.

So when Carly does leave Sonny, GH spoilers indicate she’ll end up with Jason Morgan (Billy Miller) and they have a talk about his Stone Cold past, mob life, and the memories he’s lost. Carly is a font of information that Jason wants to know.

For instance, Jason knows nothing about Sam Morgan’s (Kelly Monaco) past with Sonny – and that one is guaranteed to be a shocker. Carly needs something to distract her from her marriage misery so after she and Jason talk, he becomes determined to rediscover his past.

Jason thinks that Stone Cold was a bad dude, but Carly will give him a glimpse of the flip side – of the guy who protected and loved people and who carved out a new life for himself after his old one ended when AJ crashed them into a tree and his brain was broken.

Carly and Jason set out on a mini-mission to try and recover more of his memories and we know that one major recollection will break through as a result of their talk and their efforts. But where will Jason’s trip down memory lane take him?

And will spending time with Jason convince Carly to go back to Sonny – or keep walking away? After all, Jason is an amnesiac now because of the mob mess. Jason doesn’t want to go back to that life ever – so how will his stance affect Carly?

Don’t miss a moment of GH – this storyline kicks off and will carry through the week with Carly and Jason together again! Share your comments below and come back to CDL often for more “General Hospital” spoilers and news.