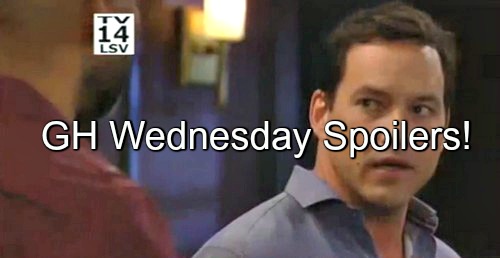 “General Hospital” (GH) spoilers reveal on tomorrow’s episode, Wednesday, April 6, that the consequences of his actions will hit Nikolas hard – plus Alexis gets too deep into Kristina’s love life, Sonny won’t give up on keeping Ava and Avery apart, plus Jason and Sam ponder the Hayden shooting.

Here’s what to expect on tomorrow’s GH episode…

Nikolas thought it was going to be easy to get rid of Hayden but she’s taking the “Shoot me once, shame on you. Shoot me twice, shame on me” approach. Curtis is there to keep Hayden safe and it works out to be a win-win since he knows she’ll share the money.

GH spoilers tell us that Curtis gets in Nikolas’ face and tells him that they know he had Hayden shot. Of course, Nikolas will scoff and deny it but when Curtis says they have proof, the dynamic will change. Look for some interesting (and violent) action this week at Wyndemere

Jason Morgan (Billy Miller) and Sam Morgan (Kelly Monaco) talk about Nikolas – and Jason shares that he thinks her cousin is capable of anything. He hates the guy but Sam tries to get Jason to mellow out. That won’t work for too long.

By the end of the week, General Hospital spoilers predict Jason will have brawled with both Nikolas and Curtis. Fireworks are coming! Tracy Quartermaine (Jane Elliot) has worm eradicating surgery that will also turn out with an intriguing result by week’s end.

Alexis Davis (Nancy Lee Grahn) is meddling in a big way with the persona life of Kristina Corinthos (Lexi Ainsworth) and has gone to her college to talk face to face with Parker Forsyth (Ashley Jones). Will Parker be offended that Alexis thinks she influenced Kristina into thinking she’s gay.

Also if interest is that Parker is a strong woman of close to the same age (give or take) as Alexis. That’s got to bother the lady lawyer to some extent. Kristina will tell Molly Lansing (Haley Pullos) that Alexis was not nearly as understanding as Molly was sure she would be.

Carly Corinthos (Laura Wright) is concerned that Sonny Corinthos (Maurice Benard) is dabbling in dangerous things and she’s right – and it’s on two fronts. Sonny is still playing scare tactics on Ava Jerome (Maura West) and it will get ugly soon.

Ava really wants Avery back home but she will find something terrifying at her place. A new GH spoilers video shows Ava waking with blood in her bed like in The Godfather. Sonny is really playing dirty but, unfortunately, he doesn’t know all the players in the game.

Sonny finally believes Julian Jerome (William deVry) is out of the mob just as he’s getting back in – and now he’ll have to deal with Ava’s older brother who already called him out on his nasty games. Carly will beg Sonny not to stick his neck out too far – that won’t slow him up a bit.

All this and more on the Wednesday, March 6, GH episode. Watch and then tune in to CDL for more “General Hospital” detailed daily spoilers and more!