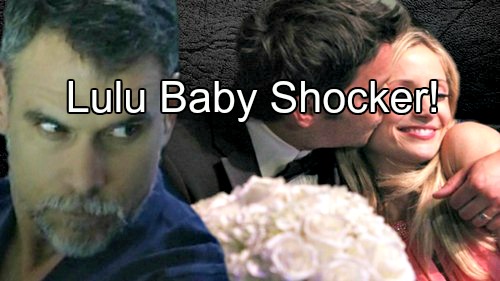 “General Hospital” (GH) spoilers tease that Lulu Spencer (Emme Rylan) will surprise Dante Falconeri (Dominic Zamprogna) when she reveals she’s ready for a second child and wants to implant the embryo they have in storage. But they have a shock in store.

Remember the duo were ready to take the leap last year, but then Dante slept with Valerie Spencer (Brytni Sarpy) and Lulu refused to start the process. But GH spoilers say it seems like Lulu has finally forgiven her husband and is ready to move forward with baby #2.

Lulu will break the news to Dante in a sweet way. As they’re looking at real estate listings, because they’re buying their first home together, Lulu tells him to make sure “there’s room for four.” Of course, their little family is just three – Dante, Lulu and Rocco.

When Dante figures out what she means, he’ll be thrilled. But once they’re ready to implant the embryo, General Hospital spoilers hint they may get bad news. You’ll recall that Stavros Cassadine (Robert Kelker-Kelly) also had an embryo with Lulu, although she wasn’t willing.

Lulu has been under the impression that embryo was destroyed in the Crichton Clark fire, but Helena Cassadine (Constance Towers) saved it. Did Helena have the embryo implanted in a surrogate? Did Helena also have Lulu’s other embryo destroyed?

There’s still the mystery of why Helena left Lulu an empty envelope. Anna Devane (Finola Hughes) assured Dante and Lulu that the embryo is safe, but Helena may have swapped it with the Stavros one, or may have had it destroyed and left a tube of nothing in its place.

What’s also important are GH spoilers that Jake Webber (Hudson West) spent time with a woman and child while he was on Cassadine Island. Some spoilers tease that might be the child of Lulu and Stavros that Helena had a surrogate carry and was raising until her death.

Other General Hospital spoilers tease that Lulu and Dante will leave Port Charles, possibly with Laura Spencer (Genie Francis) as she explores her Helena mystery, and will look for answers on Cassadine Island. Some long-simmering GH spoilers hint that Lulu’s brother knows big secrets.

These spoilers tease that Nikolas Cassadine (Tyler Christopher) knows some of Helena’s secrets that could impact Lulu. Could Nikolas know that he has a nephew/brother as a result of the embryo and surrogacy but never told Lulu she had another child?

This new darker Nikolas would keep an awful secret like that from his sister. What do you think GH fans? Is Dante and Lulu’s embryo gone? Is it there but not viable? Will they trek to Cassadine Island and come home with another child, but one fathered by Stavros?