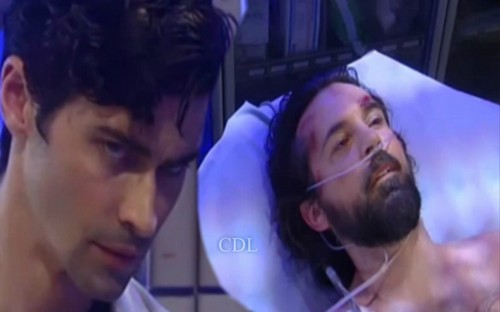 “General Hospital” (GH) spoilers suggest Carlos’ (Jeffrey Vincent Parise) deathbed confession leaves many Port Charles residents reeling! The key to who ordered the hit on Duke (Ian Buchanan), the bombshell that Carlos did NOT shoot Sonny (Maurice Benard), and more; all the details, including identifying associates, cleared from his guilty conscience.

When it is clear that Carlos will not make it to surgery, Anna (Finola Hughes) is desperate for one last chance to talk to Carlos and persuade him to point the finger at Julian (William DeVry) for ordering the hit on Dukes life. A deathbed confession is Anna’s last chance at avenging the love of her life.

Amidst the confusion, Dr. Munro surprisingly reveals, almost painfully, that he is not only a doctor but also a priest. General Hospital spoilers say it is with shocking irony that Anna and Sonny witness Griffin willingly provide last rights to the man that killed someone so important to them all. 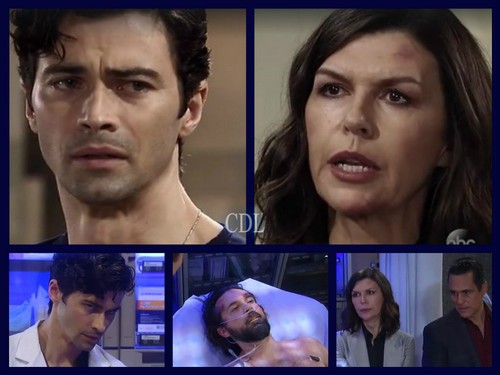 It would seem clear to both Anna and Sonny that Griffin would use whatever information he obtained to provide closure for Duke; however, they have profoundly underestimated Griffins spiritual bounds. The decision to remain loyal to Anna and provide details for the case against Julian is not an easy one.

If Griffin decided to keep Carlos’s final words confidential he would no doubt be betraying Anna. He would also potentially be severing the last remaining ties he has to his father. Could Griffin live with that regret after living a life knowing nothing about his father?

If, however, he was to give in to the pressure to betray Carlos’s confidence, he would be turning against the promise he made as a priest. Is that a burden he is willing to carry?

GH spoilers say that Anna’s fury would certainly deepen to rage with the realization that the justice she sacrificed so much to obtain will never happen. In her eyes, Griffin would be the sole reason she is without closure while Julian remained free as a bird and Carlos peacefully in the afterlife.

Either way, with her attention turned toward Griffin, Anna is forced to question his motives. A recent promo shows a betrayed Anna asking Griffin, “Why have you been lying to me since you came to Port Charles?” His answers could be the key to unlocking the mysteries of his past.

Will Anna use this information to seek revenge against Griffin? Also, how will Sonny react to Griffin’s loyalty to his faith? Share your comments below and come back to CDL often for more “General Hospital” spoilers and news.