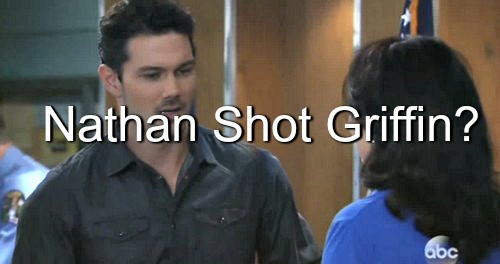 “General Hospital” (GH) spoilers tease that we’ll get a glimpse of Griffin Munro’s (Matt Cohen) past and when he opens the kimono, we’ll be surprised at what we find. It looks like GH’s hottest new doc has a history with Nathan West (Ryan Paevey), Claudette and the priesthood.

We’ve all seen Griffin’s bullet scar – Maxie Jones (Kirsten Storms) recognized it for what it was right away. But who would have shot Griffin who is seemingly peace loving? The first hint came when Griffin told Maxie he won’t spend time with a woman in a relationship ever again.

Then he hinted at mistakes from his past. We know Claudette cheated on Nathan but there’s more to it. Dr Obrecht (Kathleen Gati) recently told Nathan to keep quiet about the truth of his messy past with Claudette or he’ll end up in Pentonville.

We know Nathan didn’t kill his wife since GH has hired an actress to play Claudette – and General Hospital spoilers say she’ll hit town soon – hopefully for May sweeps. What’s far more likely is that Nathan caught Griffin bedding his wife and shot him in a fit of jealous rage.

Nathan may not have ever seen Griffin’s face – it could have been dark – or some other circumstance where he couldn’t see who he was. But obviously Griffin knows who Nathan is and seemed very disturbed when he saw him.

What’s also of interest is that Daytime Confidential has teased that Griffin has a past as a priest or some other similar avocation – and DC usually gets spot-on inside information. But did Griffin take a vow of celibacy before or after he met Claudette?

Was he a priest who broke his vows to be with her? Or did the shooting incident convince him he needed a time-out from women and he took a vow of celibacy while recovering? Griffin seems like a decent guy so GH spoilers speculate that he may not have known Claudette was married.

Nathan told Maxie that Claudette was cheating the whole time they were together so perhaps she married Nathan after getting involved with Griffin. To be sure, this will be a complicated storyline, but how will it all come out?

Maxie just hired Sam Morgan (Kelly Monaco) to look into Nathan’s past with Claudette and that means Sam might find all of Nathan’s dirty laundry. GH seems to be teasing a split of Maxie and Nathan and a Maxie and Griffin hook-up.

You don’t forget a woman that you were willing to kill someone over… This plot will likely NOT unfold entirely in May sweeps. This looks like a slow burner that will take us into summer and possibly Fall since GH likes to roll out stories at a glacial pace.

However, this does look like an interesting storyline and should be fun to watch. Nathan is such a good guy cop at a glance and to find out he shot someone in anger and has a skanky ex-wife that he can’t get over is an intriguing backstory that sullies him up nicely.

What do you think GH fans? Did Nathan shoot Griffin over Claudette? Why doesn’t he know Griffin’s face when Griffin clearly knows him? Share your comments below and check back with CDL often for more “General Hospital” spoilers and news.