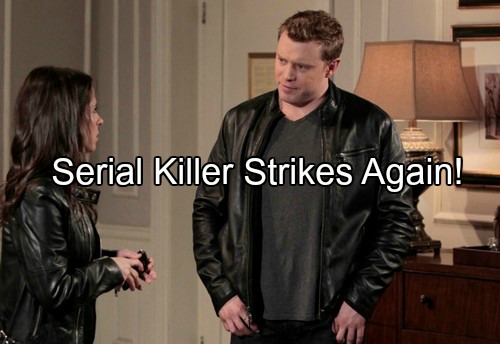 “General Hospital” (GH) spoilers for the hot summer drama keep piling up and now there are more details about what we’ll see in Port Charles in coming weeks episodes. The GH serial killer will take at least one more life while two marriages hit the skids and an adventure turns deadly.

Here are General Hospital spoilers to give you a look at what’s brewing for summer.

Sonny Corinthos (Maurice Benard) will play into the drama going on with his kids and their love lives. Sonny will be stunned when he finds out Kristina may be into chicks but will also be hurt that he’s the last to know about her gender-crossing curiosity.

Sonny also factors into Morgan’s continued desire to pursue Kiki despite her growing interest in Dillon. But GH spoilers say Nina Clay (Michelle Stafford) may also throw a fourth leg onto that triangle when she gets flirty at work with Dillon. She did try to drunkenly seduce him so there’s interest there.

Alexis Davis (Nancy L Grahn) and Julian Jerome (William deVry) will hit an impasse when he founds out she’s stashed evidence against him but Alexis discovers that no matter what, she just can’t quit her mob man. Will Alexis put her law career at risk to keep the good loving in her life?

The other mob marriage possibly on the rocks is Carly Corinthos (Laura Wright) and Sonny’s. The problem is, Sonny continues to be involved in mob violence and Carly hates that. Plus, Carly is involved with Hamilton Finn (Michael Easton) looking for kidney clues and Sonny hates that.

Not only are Jason Morgan (Billy Miller) and Sam Morgan (Kelly Monaco) headed to Cassadine Island, but Sonny and a newly returned Damien Spinelli (Bradford Anderson) pitch in to help exonerate their favorite former hit man but nothing prepares JaSam for the danger they face on their quest.

The other big mystery takes place over at GH and it looks like brand new cop Valerie Spencer (Brytni Sarpy) might be the one to solve the crime but could find her life in danger before she can reveal the culprit. Before that, though, at least one other person will die in July thanks to the GH serial killer!

It looks like GH showrunners took May sweeps as a jumping off point to an insanely action-packed summer. You don’t want to miss any of the action in June and July. Share your comments below on the hot summer action and check back with CDL every day for more “General Hospital” spoilers and news.