General Hospital (GH) Spoilers: Was Carlos Rivera Really Murdered This Time – Is He Alive or Dead – Vote in Our Poll 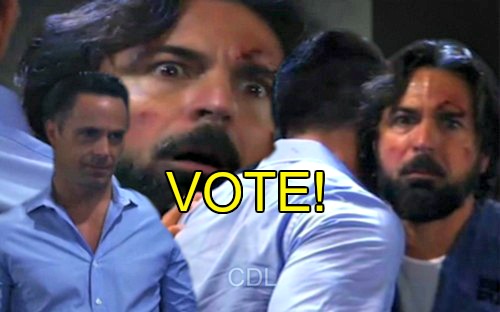 “General Hospital” (GH) spoilers tease the Carlos Rivera (Jeffrey V Parise) may really be dead this time. However, it has looked that way before – like when Anna Devane (Finola Hughes) emptied a clip into him last year. So what do you think? Read then vote in the General Hospital POLL.

Was the knife to the gut the coup de grâce for Carlos?

It’s definitely a legitimate injury and looked pretty nasty since it came from that wicked Cassadine dagger. There was no bulletproof vest or other trick to protect Carlos this time since he didn’t see the blow coming. But you have to give Julian Jerome (William deVry) credit – at least he didn’t stab Carlos literally in the back.

You have to watch them die…

If there’s anything we know about Port Charles, it’s that you need to stand there and watch your victim die. Cesar Faison (Anders Hove) – in his Duke mask – failed to make sure Jason Morgan (Billy Miller) was dead before he kicked him into Port Charles harbor. It looks like Julian will make that same mistake and won’t confirm the kill.

Resurrections happen even when people flatline

Even if you watch someone die, that doesn’t mean they’re dead on GH. We watched Robin Scorpio (Kimberly McCullough) blow up and Jake Spencer (Hudson West) was hit by a car, died AND donating a kidney (which obviously he really didn’t) then came back. So, in the world of General Hospital, dead is not dead unless they burn the corpse on a funeral pyre.

Carlos needs to be alive

If Carlos is truly dead, that would allow Julian to avoid paying the price for killing Duke Lavery (Ian Buchanan) and that’s not cool. Plus, some spoilers tease Julian’s arrest at the Nurse’s Ball for Duke’s shooting, so that indicates Carlos will survive. However, Carlos could have made a video deposition and left it for safe keeping in case he was killed…

Carlos was injured from the car crash too…

But, then again, another fact in favor of dead Carlos is that he was in a nasty car accident and was injured f even before Julian put the dagger in his gut. With that level of trauma, plus Julian kicking him into the freezing water of the harbor, it doesn’t seem like Carlos would have the strength to save himself, so he could have kicked the bucket.

What do you think GH Fans?

Is Carlos alive or dead? Vote in the poll then share your comments on why he is dead OR alive below. And be sure to come back to CDL for more “General Hospital” spoilers and news every day.