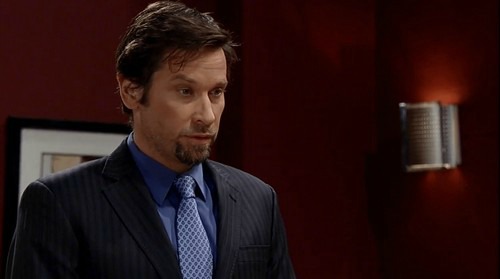 “General Hospital” (GH) spoilers tease that ABC showrunners are playing “hardball” in contract negotiations with Roger Howarth which could mean Franco may be leaving Port Charles for good unless the network and soap star can reach an agreement.

Soap Opera Digest reported the renewal negotiations as a blind item but then the excellent Facebook group Soap Fans United confirmed that the “veteran actor” being subjected to hardball contract negotiations is indeed Roger Howarth.

This is very reminiscent of the tough talk and reportedly lowball offer that ABC/GH producers made to Rebecca Herbst that almost sent legacy character Liz Webber packing. Will fan outcry be enough to pressure ABC to keep Howarth and write a big enough check to keep him around?

Franco is key to a number of plotlines. He’s the casual nemesis of Jason Morgan (Billy Miller) and has a brewing romance with Liz. A kiss has already been filmed between Franco and Liz that will air around June 1 and Franco is pushing for more from Liz – and she’s ready to move on from Jason.

Plus, there’s the Jake Spencer (Hudson West) storyline where Franco is integral. But did GH showrunners set the stage for a possible exit of Roger Howarth by splitting him with Nina Clay (Michelle Stafford) and putting the romance with Liz on a slow burn so it could be extinguished at a moment’s notice?

General Hospital fans have to be wondering why the show is casting new blood – Risa Dorken (Nurse Amy), Robin Riker (Naomi Dreyfus) and Trent Dawson (Huxley) – when yet another core character is facing destruction as a result of tense contract renewal talks.

If Franco leaves, that also diminishes storyline opportunities for legacy character Scott Baldwin (Kin Shriner) and seems to eradicate any reason to bring back Heather Webber (Robin Mattson) now and again. The Franco-Nina split also sets the stage for the culling of Nina herself if budgets get tighter.

GH showrunners just demanded a higher Nurse’s Ball budget from ABC – and got it – so it’s disturbing that they might cut corners when it comes to renewing characters that fans love. If Roger Howarth has to leave GH, one of the CBS soaps would be wise to snap him up – he’s a talent with a fan base.

Howarth still has a following from his One Life to Live days plus a legion of fans from his long-running General Hospital turn as Franco. It would be a shame for GH to lose this talent. Let’s hope they wise up and get busy inking a renewal deal with Roger Howarth so the Franco-Liz romance can continue.

What do you think GH fans? Do you want Franco to stay around? Looks like it’s time to pressure Nathan Varni and Frank Valentini to renew – start Tweeting now! Be sure to stay tuned to CDL every day for more “General Hospital” spoilers and updates on the Roger Howarth contract talks.

Update: Nathan Varni posted on Facebook that Roger Howarth is not the person having contract problems nor did SOD’s blind item refer to GH at all – our beloved Franco is safe! Guess TPTB at GH and Nathan Varni learned from their Rebecca Herbst contract debacle.

“Soooo you know how sometimes people like to get our loyal ‪#‎gh‬ fans all fired up over nothing? That sadly happened earlier today in regard to the magnificent & talented Roger Howarth. For some reason a certain blogger took a blind item which was posted and fooled everyone into believing it was Roger & GH related. I’m happy to confirm their “sources” perhaps thought today was April Fools Day and decided to completely make up the story without ever reaching out to ABC to ask the question. Perhaps asking for the real answer would take the fun out of reporting inaccurate information. The truth is that blind item had and has absolutely nothing to do with GH or Mr. Howarth.”