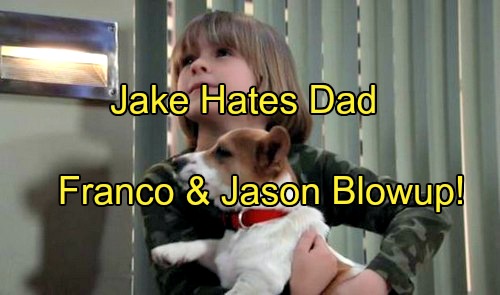 “General Hospital” (GH) spoilers tease that Jason Morgan (Billy Miller) may have recovered his memories on this week’s episodes but now he’s on the brink of losing his relationship with his son Jake Spencer (Hudson West) – and it’s all about his son’s ties with Franco (Roger Howarth).

In coming days, Liz Webber (Rebecca Herbst) will have to break the news to Jake that he won’t be doing art therapy with Franco anymore and this will really upset Jake. Will Liz tell little Jake that Jason is the one who put the kibosh on the sessions with Franco?

General Hospital spoilers say that Jake will be very upset and he may run off to see Franco to ask why they can’t see each other anymore. Jake and Franco have a deep bond since they are both troubled and potentially violent. Franco has changed and is no longer a threat, but Jason doesn’t see that.

Jason already didn’t like Franco and now that his memories are back, he’ll recall how Franco tormented him into thinking Franco raped Sam Morgan (Kelly Monaco) on their honeymoon and all their other horrible interactions when Franco was obsessed with him.

If Jake does run off to see Franco, of course the reformed serial killer will ask why he came to see him without his parents. GH spoilers assume that Franco would contact Liz so she won’t be worried about where her son is.

Will Liz then regret taking Jason’s side in the decision to stop art therapy with Franco?

We can expect another confrontation between Jason and Franco over Jake and it won’t go well. Remember when Franco gave Jake the puppy (which is not a cool thing to do without checking with the parents) then Jason said no to the canine – and Jake told his dad he hated him?

This next encounter will drive a deeper wedge between father and son and Jake will lash out at Jason for taking Franco away from him. Jason will then blow up at Franco in rage over what he sees as the latest in a series of actions by Franco to destroy his life.

Franco has changed but can Jason see that? Will Jason’s concern for his son’s mental health override his hatred of Franco? Liz told Jason that Franco was important to Jake and has been helping him work through his issues, but Jason refused to listen.

It was surprising that Liz caved and pulled Jake from art therapy sessions – but after this incident and Jake’s outrage over losing Franco, Liz may change her mind. How bad will the confrontation between Franco and Jason be?

Jason is certain that Franco is poisoning Jake against him when, in reality, Franco is just helping the kid. Jason is right to be angry about their poisonous history, but 100% wrong that Franco is still a threat. Will Jason see the light or will his temper get the better of him?

If Jason assaults Franco in front of Jake, he might lose his son forever. What will Jason do? Will he back down and see the light? Or will Jason keep pushing to get his way and alienate both Liz and Jake – and push them closer to Franco?

What do you think GH fans? Should Jason forgive and forget when it comes to Franco for the sake of little Jake? Or will these confrontations escalate and cause Jake to withdraw from Jason? Share your comments below and come back to CDL for daily “General Hospital” spoilers and news.