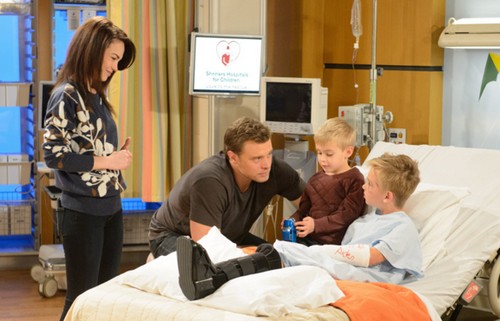 “General Hospital” (GH) spoilers reveal that Jake Spencer (James Nigbor) will finally get the treatment he needs for his severe injuries incurred when he was struck by the car outside his home. And it looks like both Liz Webber (Rebecca Herbst) and Jason Morgan (Billy Miller) will be on hand for the ordeal.

But is this one of the last storylines for Liz? Hmm… Not only will Jake’s parents be there to see him get the treatment he needs but he troubled young man will enjoy several visitors during his stay at the Philadelphia hospital.

Nikolas Cassadine (Tyler Christopher) will come to visit and bring more of Liz’s family along. Looks like Nikolas will bring along Aiden Spencer (Jason David) and Cameron Spencer (Michael Leone) to see their brother. 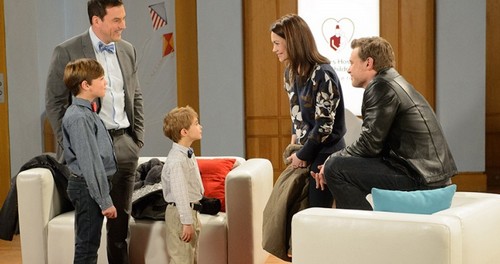 And GH spoilers indicate that Jake’s other brother Danny will also visit – since Monica Quartermaine (Lesley Charleson) will also visit, perhaps she brings her grandson Danny along. This is the second year that Shriners will feature prominently in a “General Hospital” storyline.

You’ll recall that last year, Cameron accidentally started a fire at Wyndemere that left Spencer Cassadine (Nicolas Bechtel) burned and needing treatment which he received at Shriners. Jake will receive orthopedic treatment for his broken limbs at Shriners.

We also have to wonder when or if his psychological issues will be addressed at Shriners. GH spoilers indicate the bulk of Jake’s orthopedic treatment will air the week beginning Monday February 29.
Will Franco (Roger Howarth) come to see Jake since he cares about the kid and hopes to help in his psychological recovery? Will the docs at Shriners also offer some psych therapy for Jake while he’s there?

General Hospital spoilers also indicate that Jason and Liz will find out in coming days some of what happened to Jake when he was held on Cassadine Island. And it looks like Nikolas’ visit to see Jason, Liz and Jake may be the beginning of some healing for all of them.

But with Rebecca Herbst’s contract renewal at GH still up in the air, we also have to wonder if this might be one of the last major storylines for Liz if TPTB at ABC don’t work out a deal to keep the iconic legacy character who has been on the show for almost 20 years.

What would happen to Jake, Cameron and Aiden if Liz isn’t on the character canvas anymore? Would they have to pull them all out of the cast and essentially wipe out one of the founding families that is core to the show – the Webbers? Or would they recast Liz?

Fans are up in arms about the possible loss of Rebecca Herbst, so we’ll see. If you’re a longtime GH fan, don’t miss a moment of these Shriners scenes with Liz, Jason, Jake and their loved ones. You never know – it might be one of the last big stories we see with Liz ever…

What do you think GH fans? Are you excited to see the ABC soap support such a great cause as Shriners Hospitals once again? Are you hoping this isn’t the last of Liz and that showrunners will lock Herbst in for a renewal deal? Are you curious about what happened to Jake while he was kidnapped?