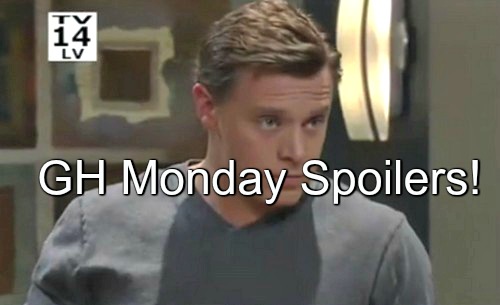 “General Hospital” (GH) spoilers reveal Jason goes after Franco on next week’s episode, Monday, April 25, plus we’ll meet the new Jake (Hudson West). Ric (Rick Hearst) is back to make trouble, Sonny’s ready to kill, Carlos wants a fat stack of cash, and Nina’s bad day gets worse. Here’s what you’ll see on the next GH.

Carlos Rivera (Jeffrey V Parise) wants to get paid for his trouble and tells Alexis Davis (Nancy Lee Grahn) to convey to Julian Jerome (William deVry) that he expects him to be generous for Carlo’s silence. Alexis is way deep into the waters of conflict of interest with this one.

She’s also skirting perjury and witness tampering issues by taking an offer like that from one client to another. Things get worse when everyone finds out there was a witness to the shooting of Duke Lavery (Ian Buchanan). Is that why Ric Lansing is suddenly back in town?

Did Ric see Duke get shot? Or is it a throwaway character like a valet that Julian could easily have whacked to end the trouble? General Hospital spoilers indicate we’ll learn about this twist in the case on Monday that makes things look very dire for Julian and Alexis.

Ric has face time with Sonny Corinthos (Maurice Benard) and they discuss Sonny’s desire to off someone. Is it Carlos he wants dead? Julian? Likely both, but will Ric caution his brother to pump the brakes and let the justice system do its work?

Also, will GH showrunners explain why Ric has been MIA since he was forced to sign annulment papers by Nina Clay (Michelle Stafford)? Or will they ignore his prolonged absence? Did Ric find out Liz Webber (Rebecca Herbst) is available again so that’s why he’s back in Port Chuck?

Over at General Hospital, Franco (Roger Howarth) gifts Jake Spencer with the puppy Nina rejected. It’s a sweet debut moment for the new Jake who looks a bit younger than James Nigbor – what a relief for GH fans that they didn’t SORAS Jake with this recast as they did Josslyn Jacks (Eden McCoy).

Jason Morgan (Billy Miller) is annoyed by Franco’s perceived interference with Jake even though Franco didn’t intend to provoke Jason. Jason will get a memory flash of his horrid history with Franco and snaps. GH spoilers indicate things get physical and Jason comes at Franco.

Will Jason assault Franco in front of Jake? Let’s hope not. Both Franco and the puppy may wet the floor. At Crimson, Nina is not happy to find Julian at her desk and wants to know why he’s there. Julian agreed to let Nina run Crimson, so why is he lurking? GH spoilers indicate a change of status between them.

And where is Sabrina Santiago (Teresa Castillo)? Her aunt was pretty convincing with her story about not seeing Sabrina for months but then Michael Quartermaine (Chad Duell) found the baby toy and now he and Felix DuBois (Marc Samuel) want answers.

Where is Sabrina and are she and the baby safe? Will her aunt give up her location? Michael will not settle for anything less than the truth. Don’t miss any of the action on Monday’s episode, April 25, and check back with CDL for more “General Hospital” spoilers including a week ahead spoiler coming soon!