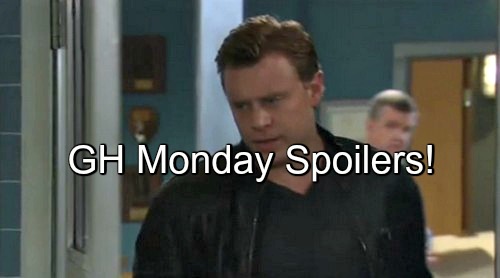 “General Hospital” (GH) spoilers tease that Sam asks Julian tough questions on next week’s episode, Monday, May 2. We’ll see Jason team up with Sonny and try to stop Michael from a major screw-up, Alexis figuring out important info about the witness against Carlos, and Jordan giving in to her jealousy over Andre and Anna.

All this and more on the next GH episode.

But does Julian know who shot Sonny? GH viewers saw Paul Hornsby (Richard Burgi) confess to the attempted murder, but did Carlos share that fact with Julian? It’s interesting that Sam focuses on one crime that Julian seems to have not committed in his mob boss tenure.

It’s the anniversary of Duke Lavery’s (Ian Buchanan) death and Anna Devane (Finola Hughes) is out of the jail in time to commemorate the important day with Griffin Munro (Matt Cohen) whom she meets at the Floating Rib. General Hospital spoilers reveal Anna and Griffin celebrate his dad’s life in an unusual way.

Also at The Rib is Mac Scorpio (John J York) who wants to know more about Duke’s kid, but Griffin is hesitant to reveal his past which we know has some dark secrets. Later in the week, though, Griffin will open up to Anna about some of his former life before he came to Port Chuck.

Alexis Davis (Nancy L Grahn) wants to talk to Hale since she’s worried his testimony will sink Carlos which will, in turn, sink Julian. Hale doesn’t want to talk to her and we know he’s on borrowed time. GH spoilers reveal that Nathan West (Ryan Paevey) finds an injured Hale soon.

Back at the PCPD, Jason Morgan (Billy Miller) is concerned about Michael Quartermaine (Chad Duell) chatting with Carlos after Sonny asked him to keep an eye on his son. Carlos wants Michael to help him break out of jail. Jason gives advice to Michael and tries to keep him out of trouble.

Did Nikolas Cassadine (Tyler Christopher) call the FBI on his wife Hayden Barnes (Rebecca Budig) to try and get rid of her? Hayden has to endure questioning by the FBI but it looks like the Feds will have to cut her loose since they have no evidence against her – at least for now.

Hayden runs into Nikolas who insists he has to protect himself from her. But as far as Hayden is concerned, she and Nikolas aren’t done and thinks her hubby is bluffing. What’s next for this volatile duo? Will Hayden take Curtis Ashford’s (Donnell Turner) advice and just go?

Jordan Ashford (Vinessa Antoine) interpreted Andre Maddox’s (Anthony Montgomery) testimony for Anna as him having romantic feelings for the Brit. Jordan slaps Andre in a jealous rage but that fight turns into something feistier and the two end up in bed.

Be sure to watch Monday’s episode, May 2 as May GH sweeps kick off with a bang and check back with CDL for detailed daily “General Hospital” spoilers plus news and more.