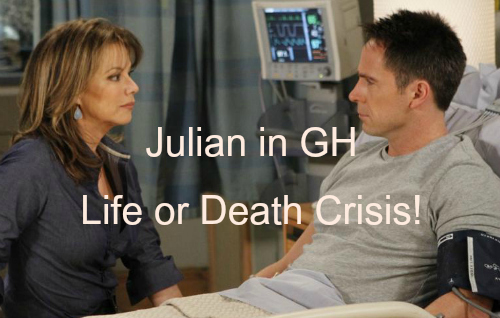 General Hospital (GH) spoilers reveal that Julian Jerome (William deVry) will be in GH as a patient by mid-July and in life-or-death shape. What happened to the mobster? Is this karma for killing Duke and Carlos or something else?

Did Sonny Corinthos (Maurice Benard) decide that the justice system isn’t going to nail Julian and opts to take care of it himself? Or does Alexis Davis (Nancy Grahn) hurt Julian – intentionally or on accident?

People scoffed, but then it happened, so this leak is hopefully just as viable. The script shows that Julian is housed on the 10th floor of GH and gets visits from Lucas Jones (Ryan Carnes) and Olivia Falconeri (Lisa LoCicero).

Julian is in good health so far as we know, so it seems much more likely that someone causes bodily harm to Julian and that’s what lands him at the hospital. What may also be of interest is whether Griffin Munro (Matt Cohen) has to treat him. 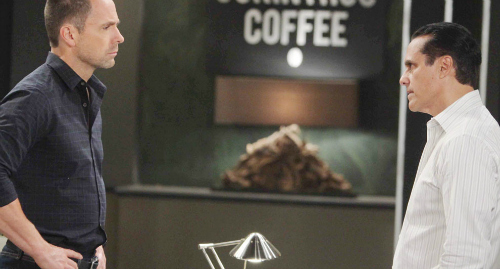 Griffin tries to be a forgiving guy, but how will he handle having to deal face-to-face with the man who ordered the hit on Duke Lavery (Ian Buchanan)? Will someone tell Julian that his doc is Duke’s son? Or will it be Griffin himself who reveals that fact?

Either way, if something happens to Julian while he’s in GH, suspicion might fall on Griffin since he’s got one hell of a motive to do something bad to the Jerome cartel boss. It’s not like Julian can say “I’m sorry” to Griffin since that would be admitting guilt for the hit on Duke.

This should be gut-wrenching to watch. But what’s really of interest is what event lands Julian in the hospital. The most obvious scenario is that Sonny takes out a hit on Julian. Sonny has been trying to cooperate with the PCPD, but may lose patience.

Even if it’s not Sonny that harms Julian, he’ll be the likeliest suspect in the eyes of the PCPD. Alternately, Alexis may snap and harm Julian. She wouldn’t do anything premeditated to hurt Julian, but there are other ways she could hurt him.

For instance, if Julian caves to the suggestion of ghost-Carlos to kill his wife, Alexis may fight Julian off in self-defense and do near-lethal damage. Alternately, they could bicker and she could push him out of her way but he could fall down stairs. 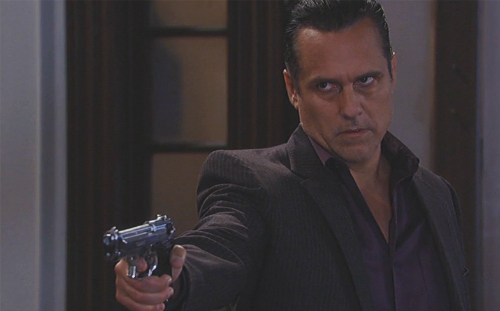 Stair falling is always good soap opera storyline and we haven’t had a good slip and fall in Port Charles in a while. Whatever way it happens, Julian lands in GH and General Hospital spoilers tease that it might be life and death stuff.

What do you think GH fans? Do you think it’s Sonny or Alexis that takes action that land Julian in the hospital? Share your comments below and check back with CDL often for more General Hospital spoilers and news.