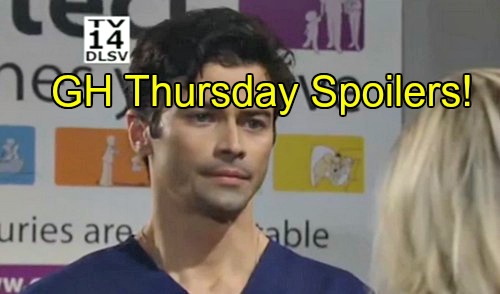 “General Hospital” (GH) spoilers reveal that Julian takes drastic measures on tomorrow’s episode, Thursday, May 12. Plus we have Sonny and Alexis continuing their bitter argument, Franco appealing to Nina, Michael saves someone, and Anna lingers near death. Check out these GH spoilers for tomorrow’s episode.

Griffin Munro (Matt Cohen) tells Maxie and Liesl how the surgery went. Is Nathan out of the woods? Will Nathan be murmuring about “Claudette” while suffering from his brain injury? Is Nathan’s life on the line? The good news is, his fiancée and mother get a chance to bond.

Over at Crimson, Franco (Roger Howarth) decides to drop trough and surprise Nina Clay (Michelle Stafford). Is he offering to be a parent with her? If not, it’s doubtful he can win Nina back no matter what he says or does. Unfortunately, the big appeal does not go the way he wants.

Julian Jerome (William deVry) kicks Carlos Rivera’s (Jeffrey V Parise) body into the harbor after a presumed fatal stabbing and strolls away. Will he stop by the Crimson offices since he told Alexis Davis (Nancy L Grahn) that’s where he was going? Will it be Julian that interrupts Nina and Franco’s moment?

Or perhaps it will be Sonny Corinthos (Maurice Benard)… General Hospital spoilers warn that Sonny and Alexis continue to argue and he tells her she’s lying to herself about Julian being out of the biz. But does Sonny have room to talk? After all, he’s still very much a mobster who has lied and killed many times.

Sonny wants to check out if Julian is where he says – at Crimson. Will it be Sonny that interrupts them? Or will Sonny find Julian right where he said he’d be, in the Crimson offices? Will Nina cover for Julian? Some GH spoilers tease Julian and Nina getting closer, so maybe…

Later, Julian and Alexis have a major fight over his actions. Let’s hope he brought the Cassadine dagger back from the docks or else she’ll notice it’s missing. Will Julian come clean on everything or continue to lie while Alexis makes accusations?

At the PCPD, Paul Hornsby (Richard Burgi) and Jordan Ashford (Vinessa Antoine) discuss that Anna Devane (Finola Hughes) went off on her own looking for Carlos and has not been seen since. Andre Maddox (Anthony Montgomery) hears them talking.

Andre interrupts to get more information and is instantly concerned. However, his worry aggravates the ever-jealous Jordan who still thinks Andre has a thing for Anna. Will it be Andre that saves Anna? Perhaps it’s Michael Quartermaine (Chad Duell) since spoilers indicate he saves someone soon.

We know Anna survives because she talks with Griffin later. Griffin’s big secret comes out and Anna is furious while Sonny is stunned. What is it? This has to be about more than him being a priest (which is the prevailing fan theory). But what could it be?

Lots happening on the Thursday, May 12, episode of GH. Don’t miss a moment and be sure to come back to CDL for more “General Hospital” spoilers and news.