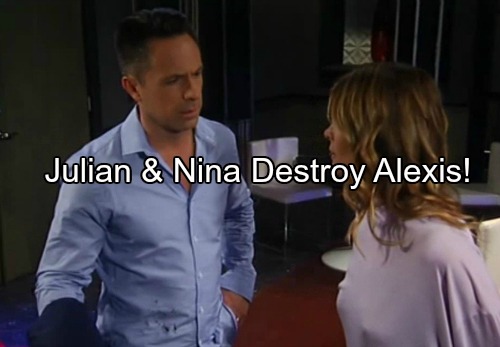 General Hospital (GH) spoilers reveal that Julian Jerome (William deVry) is in a panic about his alibi now that the PCPD has the murder weapon and rushes to cover himself so he doesn’t end up behind bars.

That means Julian needs to make a call on Nina Clay (Michelle Stafford). Julian reminded Nathan West (Ryan Paevey) that he has an alibi for the night of Carlos Rivera’s (Jeffrey Parise) murder.

Julian was flummoxed when Nathan told him they found a discrepancy in the time he arrived at Crimson and now they think he’s a possible suspect. Now that Alexis Davis (Nancy Grahn) made it clear she’s ready to hang him out to dry.

Alexis wants a divorce and won’t help her husband so it’s up to Julian to ensure he doesn’t go down for killing Carlos. That means he needs to shore up his alibi. Soon, Julian will head to the Crimson offices to talk to Nina.

Nina and Franco (Roger Howarth) are the only ones who know what time Julian showed up at Crimson. But it’s Nina that Julian will focus on. If he can get Nina to say he got there earlier, he’ll be golden.

The good news for Julian is that Nina has no particular respect for law and order. In fact, she’s a wild card who might be open to saying anything. That also makes Nina an unreliable witness but she’ll have to do.

Also, Franco could blow up Julian’s alibi and is no fan of Julian’s, but Nina may keep him quiet. Nina also knows that Julian had blood on his shirt – take a look at the pics below to refresh your memory of that night.

Julian is desperate, so pretty much whatever Nina wants, he’s got to do it. But what will Nina ask of Julian? The one thing she wants is a baby, but it’s not likely Olivia Falconeri (Lisa LoCicero) will him hand over little Leo.

Maybe Julian can do something else she wants, but what? Julian is still convinced (so far) that he can win Alexis back, so he may not embark on an affair if that’s what Nina asks. Then again, Julian has few lines he won’t cross.

Julian and Nina will bond and cut a deal but then things take a strange turn. General Hospital spoilers reveal that Olivia shows up at the Crimson offices and finds Julian and Nina in a situation she interprets as compromising.

Nina won’t care what Olivia thinks since she’s a nutty troublemaker by nature. The bottom line is that Julian will seal his shaky alibi so that takes him out of contention as Carlos’ killer as far as the PCPD can tell.

Things will take a twist when the forensic tests on the dagger come back with two results – Carlos’ DNA and Alexis’ fingerprints! Julian wiped his fingerprints off but Alexis handled it, so her prints will be on it.

After the lab tests are back, a warrant is sworn out and, according to General Hospital spoilers, a surprising arrest is made – and it’s Alexis in handcuffs. With Julian’s alibi airtight, he may have has sealed his wife’s fate.

Alexis will be locked up at the PCPD for his crime and is disgusted with Julian so even if he tries to come to her rescue, she’ll likely reject him. Good thing she’s got Diane Miller (Carolyn Hennesy) in her corner.

What do you think GH fans? Even if Alexis doesn’t go down for the Carlos killing, will Julian walk free for his crime? What will Julian have to offer Nina to get her to cover for him and lock down his alibi?