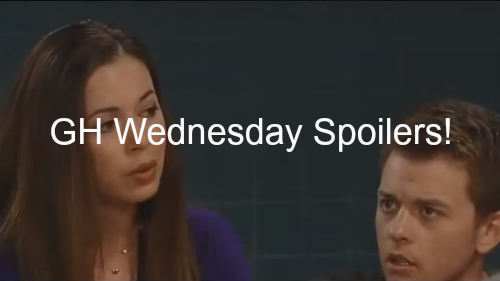 “General Hospital” (GH) spoilers for the Wednesday, June 8 episode show Alexis is scared of Julian, Ava’s scared of Sonny, Tracy makes nice, Sabrina faces off with the PCPD, plus Morgan may be released from the mental hospital soon.

Dr. Andre Maddox (Anthony Montgomery) chats with Morgan Corinthos (Bryan Craig) and it seems like he’s doing exit counseling. Morgan wonders about his new life after months at the hospital and Andre reminds he has to always take his meds.

Sonny Corinthos (Maurice Benard) is worried about Morgan too and is furious that Ava Jerome (Maura West) told Morgan to stay away from her daughter. Sonny only has suspicions, but will Ava confirm or deny what he thinks went down?

Sonny tells her he “will retaliate” if she messes with Morgan. Does that mean the custody battle is back on? Will Ava lie and say that didn’t happen? GH spoilers hint that Ava will leave town soon and this confrontation may factor in her decision.

Sabrina Santiago (Teresa Castillo) has a sit down with Anna Devane (Finola Hughes) and Paul Hornsby (Richard Burgi) and tells them she’s an open book when it comes to Carlos Rivera (Jeffrey Parise).

Michael Quartermaine (Chad Duell) is there to stand by her. But why doesn’t Sabrina have a lawyer? That seems troubling. Paul talks to Anna about them having a clean slate since they will be working together.

However, Anna seems to think that Paul has ulterior motives plus she’s still cringing from his admission that he likes her. Alexis Davis (Nancy Grahn) is stunned when Julian Jerome (William deVry) reveals he found the shirt and they have an epic fight.

Alexis is scared when Julian tells her that when it came to their marriage vows, he meant the part about “’til death do we part.” Can they recover? GH spoilers tease that Julian may be sleeping on his sister’s couch soon.

No way will Julian let Alexis keep that shirt, so will she turn the Cassadine dagger over to the cops since it’s the murder weapon? Nathan West (Ryan Paevey) will be desperate to work things out with Maxie Jones (Kirsten Storms).

Nathan wants to make amends for telling her lies. Tracy Quartermaine (Jane Elliot) shows up at Crimson to see Dillon Quartermaine (Robert P Watkins). Will she catch him making out with Kiki?

Tracy quizzes her son on how long he’s been carrying on with Kiki. Looks like Kiki may overhear something as she leaves. Tracy makes a surprising offer to someone. Is it to Kiki? Dillon?

Or is this about her new baby Edward that she’s been refusing to give back to his bio-mom Sabrina? Whatever it is that Tracy does surprises her family with its kindness.

Share your comments below on these Thursday, June 8 GH episode spoilers and check back with CDL often for more “General Hospital” spoilers and news.