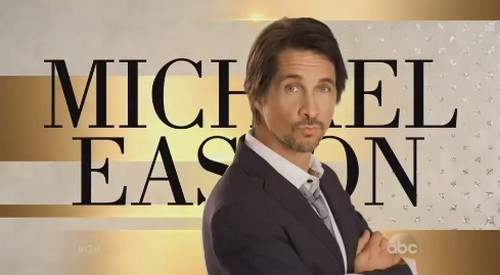 “General Hospital” (GH) spoilers tease now that Rebecca Herbst has inked a renewal contract deal, the romance machine is revving up for Liz Webber. It’s definite that Liason is done – that plot line was clearly exhausted and begging for death – so it’s time for new love for Liz!

General Hospital spoilers predict that the two most likely choices are the hot new doctors coming to GH – one already there and one was scheduled to start on next week’s Friday episode but due to Nancy Reagan’s funeral this is now pushed to Monday, March 21.

Dr Griffin Munro (Matt Cohen) and Liz have already shared some screen time and we have to admit that they had instant chemistry and their striking looks complement each other.

But on March 21, Dr Marcus Byrne (Michael Eastman) hits Port Charles and we cannot wait to see who he’ll be tangled with – fingers crossed it’s Liz. From what we know about Marcus, he’s clever and hell bent on revenge against someone in Port Charles – perhaps a mobster.

GH spoilers told us that writers revealed recently that the immediate focus for Griffin will be getting to know Anna Devane (Finola Hughes) since he’s Duke Lavery’s (Ian Buchanan) son. But they indicate romance is the next order of business – and that will be in coming weeks.

Marcus also comes to Port Charles with an agenda that he needs to explore, but he could get involved in a romance right from the start. Michael Easton’s Silas Clay didn’t have a good love story after the relationship with Sam Morgan (Kelly Monaco) went south, so we want better for him this time.

Marcus-Liz-Griffin would make an enticing love triangle that would no doubt trigger lots of interesting storyline opportunities. And with the head writers invested in restoring the show to its hospital-centric roots, two doctors vying for one beautiful nurse makes sense.

Except for one possible hiccup… what about Franco (Roger Howarth)? Franco is with Nina Clay (Michelle Stafford) now, but she’s making getting (or having) a baby her top priority and he’s totally NOT on board with that. Will the baby mama drama split Frina?

Whether Franco and Nina stay together or not, Liz and Franco are forming a strong bond – but we won’t know for a while yet if it will move beyond friendship. If Franco and Nina can work out their issues, it’s possible Franco and Liz will just be in the BFF zone.

But if Franco and Nina split, he may try and steal Liz away from both hot docs with his wacky ways. Either way, it will be fun to watch. Franco as the snarky best friend making catty remarks about Liz’s potential suitors would be hilarious whether he’s got any skin in the romantic game or not.

What do you think GH fans? Would you rather see Liz with Griffin? Or with Easton’s new guy Marcus? Or do you think Franco and Liz are the best possible pairing? Share your thoughts on your favorite pairing for Liz and be sure to check back with CDL often for more “General Hospital” spoilers and news.