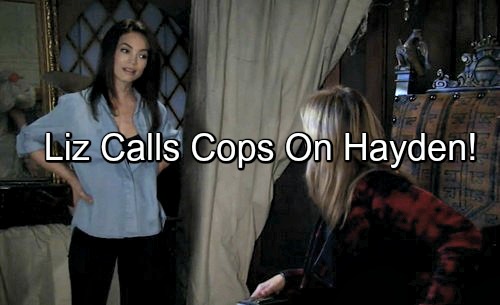 “General Hospital” (GH) spoilers reveal in a new video promo that on next week’s episodes Liz Webber (Rebecca Herbst) wants to call the cops on Hayden Barnes (Rebecca Budig) over her Rachel Berlin fakery but that sends Laura Spencer (Genie Francis) into a panic.

Liz is practically gleeful to have discovered Hayden’s dirty secret and ran to tell Laura all about it. Laura definitely recognized the name “Berlin” and they discuss that Hayden was suspected of being involved with her dad’s illegal financial schemes.

Liz seems to think the cops would be interested to know that Rachel Berlin is hiding out in Port Charles under the name Hayden Barnes. But Liz is getting ahead of herself in her eagerness to make Hayden pay for her lies.

Don’t you think Liz is being a bit hypocritical, though? I mean Liz didn’t lie about who she is but she definitely lied about who Jake Doe was, right? And that could technically be considered criminal fraud, so Liz could have been sent to the PCPD for what she did.

Laura tells Liz that she can’t turn Hayden in and says that Nikolas Cassadine (Tyler Christopher) has done worse to Hayden. Both Liz and Laura know that Nik had Hayden shot, but neither knows the other knows, do they?

Nik came clean to his mom a while ago and Liz has known since not too long after it happened. But Liz and Nikolas don’t think that Hayden knows he had her shot – they are under the impression that Hayden still thinks it was Shawn Butler (Sean Blakemore) and the bullet was meant for Jake Doe.

But Laura gives Hayden much more credit than they do. Laura thinks Hayden’s schemes run deeper. Laura tells Liz she can’t call the cops. Will Laura and Liz figure out that they both know that Nikolas tried to have his now-wife killed last year?

Laura will convince Liz the cops are not an option and that they have to protect Nikolas without involving the law. A frustrated Liz will go back downstairs and finds Hayden alone and a major argument will ensue. Liz is frustrated they can’t do anything about Hayden and gets physical, slapping Nik’s wife.

How much of this will Hayden take before she snaps and reveals what she knows about Nikolas’ dirty deeds? The missing piece of the puzzle here is who knows what Nikolas did to Hayden. Laura knows, Liz knows, Hayden knows and Nikolas knows.

What do you think GH fans? Is someone going to end up in jail soon – Nikolas or Hayden? Or perhaps both of them plus Liz and Laura for accessories to Nik’s crimes? Or will this all be settled behind closed doors with a manipulative power play?