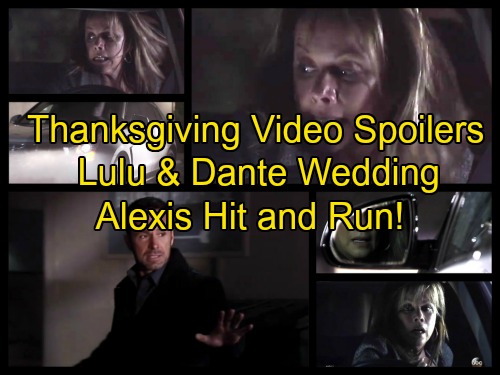 A new General Hospital (GH) spoilers promo video reveals that Thanksgiving week in Port Charles brings romance, tragedy, turkey, and some sadness as well. Dante and Lulu have big news, Alexis bottoms out, and Julian is in a life or death drama no one saw coming.

At the home of Dante Falconeri (Dominic Zamprogna) and Lulu Spencer (Emme Rylan), they have a sweet surprise in store for their Thanksgiving guests. Dante holds onto Lulu tight as she tells the assembled guests “We’re getting married” and she means right that minute!

Maxie Jones (Kirsten Storms) might be bummed she didn’t get to do any wedding planning and Nathan West (Ryan Paevey) looks stunned in the promo. Laura Spencer (Genie Francis) seems thrilled to pieces and she’s got Kevin Collins (Jon Lindström) there as her date.

Lulu and Dante have an impromptu wedding in the living room of their new house and Olivia Falconeri (Lisa LoCicero) is all smiles at the nuptials. It was just a few days ago when Dante hid her ring in some Halloween candy and now they’re getting hitched again!

The GH video says “Once the surprises are served up, this GH Thanksgiving takes a totally twisted turn.” The twisted turn is with Alexis Davis (Nancy Grahn) and Julian Jerome (William deVry). Alexis starts out her Thanksgiving trying to do good.

The video shows Jordan Ashford (Vinessa Antoine) and Andre Maddox (Anthony Montgomery) stop by to break bread with Alexis and her three daughters but then Alexis skips out on her dinner to go drinking back at the out of town dive where she passed out last week.

Julian is there meeting with someone about his deal to sell off the hospital to convert it into luxury condos and he sees his ex boozing at the bar. Alexis and Julian argue and she threatens to have him arrested for violating the restraining order.

Julian threatens to tell Sam Morgan (Kelly Monaco) she ditched Thanksgiving to go boozing at a bar. Alexis keeps on drinking and Julian sticks around to keep an eye on her and then things get much worse. Alexis gets in her car drunk and Julian tries to stop her.

Julian stands in front of her car and says stop. She doesn’t. Maybe Alexis meant to put the car in reverse or maybe she meant to go slower and was hoping Julian would move. He doesn’t. Alexis runs over her ex-hubby and then stops to consider her actions.

Alexis asks herself “what have I done?” What, indeed? Will Alexis leave Julian lying or call 911? She’s drunk and either way, whether she pulls a hit and run or sticks around, this could kill her career as a lawyer forever. Does this incident change things for Julexis?

Thanksgiving kicks off in Port Charles on Tuesday, November 22 and carries on thru Wednesday, November 23. Remember GH on Thursday is a rerun and sports pre-empt GH on Friday. Share your comments below on this hot new GH spoilers video.

#GH Thanksgiving is about to take a twisted turn. pic.twitter.com/MqU8uX9a5X