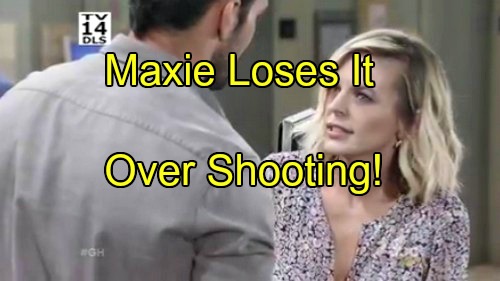 General Hospital (GH) spoilers look at the trouble brewing between Claudette and Griffin and how that will impact Maxie and Nathan, will this GH couple survive? Maxie Jones (Kirsten Storms) and Nathan West (Ryan Paevey) had a tough beginning, as they literally started out as “passing ships in the night” kind of story at the end of 2013.

She had just lost custody of her little girl, and baby daddy, Damien Spinelli (Bradford Anderson) and his girlfriend, Ellie Trout (Emily Wilson) had taken Georgie and moved to Oregon. Nathan had arrived at her door, just as she was leaving, claiming to be the new tenant who was subletting her apartment.

At the time General Hospital fans didn’t think too much of it, as Kirsten Storms had gone in January 2014 on maternity leave. While Maxie was away, we learned that Nathan (AKA James Nathan Reeves) is actually the biological son of Liesl Obrecht; even though his whole life he was led to believe that Madeline Reeves was his mother.

When Maxie returned in April of that year, her and Nathan had a lot of ups and downs, including a near fatal marriage to Levi Dinkelman (Zachary Garred). They finally make love on the one year anniversary of the day they met, but a few months later they break up again because Maxie seems caught between Spinelli and Nathan. Maxie realizes that Spinelli is her past and Nathan is who she wants to be with.

Fast forward to this year and even though Maxie and Nathan are engaged, there seems to be two too many in this couple. If the only issue had been Maxie finding out about Nathan’s secret ex-wife, Claudette “CJ” Boland (Bree Williamson), they could have survived.

Maxie, however, has never been one to let things go and move on. She not only met Claudette, she also convinced Nathan’s sister, Nina Reeves (Michelle Stafford) to hire her. Claudette has made her intentions pretty clear to Maxie, even though Nathan remains clueless.

This is where the love triangle becomes a square…

General Hospital spoilers remind us that GH recently hired a new doctor named Griffin Munro (Matt Cohen), and there was an instant chemistry between Maxie and the handsome medico. They also share a connection when she finds out that he is Duke Lavery’s (Ian Buchanan) son.

Griffin remains in the distance, but you can see how he feels every time he sees Maxie. General Hospital spoilers have provided confirmation that Griffin is the one Nathan shot when he caught someone making love to his wife. Claudette is overjoyed to see Griffin at GH, does this mean she will forget about pursuing Nathan and just want to be with Griffin?

How do you see this playing out? Will Maxie be able to forgive Nathan once she learns it was Griffin he shot, or will she side with Griffin and finally end their engagement? Either way this plays out, stay tuned to CDL for all your General Hospital updates, spoilers and news!