General Hospital (GH) Spoilers: Michael and Felix Search for Sabrina – What Becomes of Her Baby? 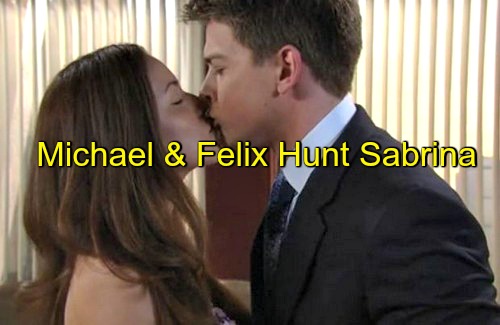 “General Hospital” (GH) spoilers reveal that the whereabouts of Sabrina Santiago (Teresa Castillo) will be revealed on a new episode this week. Last we heard, she was with Carlos Rivera (Jeffrey V Parise) but is that no longer the case? Michael Quartermaine (Chad Duell) wants to find Sabrina and it’s now more urgent.

Michael tried to get Sonny to take him to Ecuador on the Carlos hunt, but Sonny shut that down. So now what? Michael knows that Sonny wouldn’t intentionally harm Sabrina, but has good reason to worry that Sabrina and her son might be harmed anyway.

Michael feels responsible for Sabrina being in this predicament – if he had handled the news better that Carlos was her baby daddy, she’d be safe in Port Charles with him raising her son. So Michael feels like he has to put everything on the line to get her back safely.

General Hospital spoilers say that although Anna Devane (Finola Hughes) and Sonny Corinthos (Maurice Benard) close in on Carlos, they might not find Sabrina with him in Ecuador. By Tuesday’s episode, Anna, Sonny and Carlos are face to face and GH spoilers indicate shots will be fired during the confrontation.

But does Carlos die? That’s a big question. Sonny will call Michael after the showdown with an update on Sabrina’s status. The update does not comfort Michael and he’s more determined than ever to get her back.

So Michael turns to the one resource he knows care just as much about Sabrina… Felix DuBois (Marc Samuel). Felix is the one person in Port Chuck that Sabrina is still talking to and her BFF also loves her dearly.

Michael enlists Felix to contact Sabrina and obtain her location. GH spoilers reveal that Michael will be reunited with Sabrina in coming days – but not without some danger. GH spoilers say that their reunion comes at “a cost.”

Of interest is that Teresa Castillo cast doubt in a recent interview on whether Sabrina’s son would come back to Port Charles with her. This hints that there is a chance Sabrina could lose another child – perhaps because of the pursuit of Carlos. Is that “the cost” to be paid?

Could the shooting revealed in GH spoilers result in the death of Sabrina’s son as collateral damage? How awful would it be for Michael to get Sabrina back but for her to lose another son? Could Sabrina handle that? Could their relationship endure a loss like that?

What do you think GH fans? Will Sabrina lose her son in the quest to get her safely away from Carlos? Or could she simply have left her child with family to avoid a harrowing situation?

Share your comments below on Michael’s rescue plans and the risk to her newborn son. And be sure to check back with CDL often for more “General Hospital” spoilers and news.