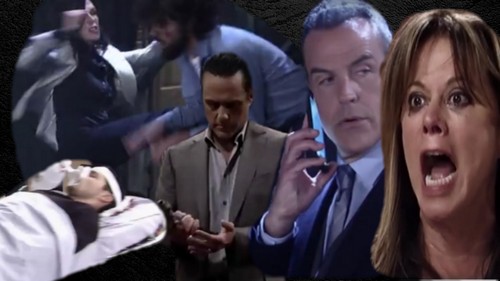 “General Hospital” (GH) spoilers in the latest video trailer shows “Mystery, Murder and Mayhem” show that all hell is breaking loose in Port Charles on this week’s episodes. Nathan may be dying, Sonny is ready to kill, Anna is furious, and Nikolas looks like he’s losing it.

Last we saw Nathan West (Ryan Paevey), he was doing well and was hunting for Carlos Rivera (Jeffrey V Parise) aside the car crash. But the video shows Nathan being wheeled into GH in dire condition. He’s got a ventilation bag on his face which means he’s not breathing on his own.

General Hospital spoilers say Carlos likely wounded Nathan in his escape attempt, perhaps when the SUV exploded and Nathan lost his focus. If it wasn’t Carlos, the explosion itself may have wounded Nathan but since the PCPD cop doesn’t look charred around the edges, Carlos seems a more likely choice.

Nathan is at GH and looking bad and we’re wondering if Griffin will be the one to perform life-saving surgery on him. It would be ironic if Griffin saved Nathan from a gunshot wound if Nathan was the one who shot Griffin. We’re still not clear on their inter-related backstory but GH spoilers promise to update fans of the ABC soap shortly. 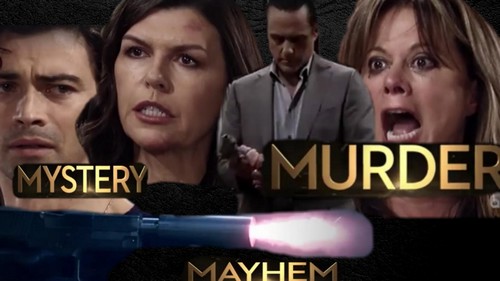 At the crash site, Jason Morgan (Billy Miller) will drag Dante Falconeri (Dominic Zamprogna) out of the way just as the SUV explodes. Looks like Jason saved Dante’s life but in all the drama, will Jason’s memories fade once again? Or is Stone Cold back for good?

Anna Devane (Finola Hughes) confronts Griffin Munro (Matt Cohen) at the hospital and says he’s been lying to her since he came to Port Charles. So with the DNA a match for him and Duke Lavery (Ian Buchanan) – unless that was a fake – what big lie has Anna so upset?

Anna looks worse for wear in that part of the video and a bit banged up and it’s likely the result of her hand-to-hand combat encounter with Carlos. General Hospital spoilers say Anna gets into a major dust up with the Jerome hit man and she decides a gun won’t do this time. Instead, Anna looks like she’s enjoying beating on him.

Anna delivers a major kick in the gut to Carlos and some other abuse. GH spoilers tease that Paul Hornsby (Richard Burgi) will help bring Carlos in – which does not seem like something he would want to do. But if Paul came across them scuffling, he would have no choice but to slap cuffs on Carlos.

Julian Jerome (William deVry) has had enough of playing cat and mouse with Alexis Davis (Nancy L Grahn) and he glibly tells her that she can “stop suspecting me now.” Is that because he confessed to ordering Duke’s killing or told her yet another lie?

A tearful Alexis rages at him – she’s hurt and angry. Alexis asks Julian how stupid that he thinks she is. Does Alexis now have proof that Julian is working with Carlos, ordered Duke dead, and had Hale, the witness, killed. GH spoilers hint that Alexis and Julian may be headed to Splitsville.

Sonny Corinthos (Maurice Benard) is loading a gun to go and deal with this issue. No doubt Sonny will soon hear that Carlos is on the loose and come gunning – quite literally – for Julian. GH spoilers tease Julian has to use the Cassadine dagger – is it to defend himself against Sonny?

Finally, outside of the overarching Julian-Carlos-Duke, plot we see Nikolas Cassadine (Tyler Christopher) lose his temper and throws what looks like a whiskey tumbler, bashing it in the fireplace. What set Nikolas off like that? Had to be Hayden Barnes (Rebecca Budig) – but what has she done now?

Don’t miss a moment of this action coming up in May sweeps. Watch the Mystery, Murder and Mayhem trailer below and check back with CDL every day for more “General Hospital” spoilers and news.