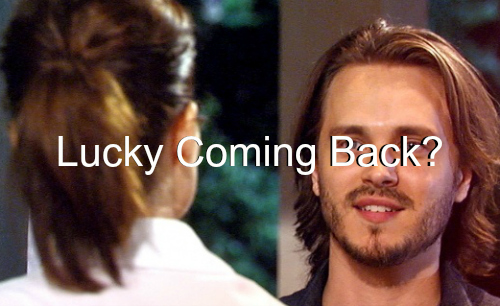 “General Hospital” (GH) spoilers reveal that Nashville renewed news does not mean that Jonathan Jackson can’t come back as Lucky. In fact, there’s a storyline already in play that hints that Lucky Spencer might be back soon.

Nashville wrapped shooting a couple of months ago and won’t pick up again for a while, even give the expected CMT renewal announcement. That gives Jonathan Jackson tons of time to film a story arc on “General Hospital.”

Lucky’s appearance may tie back to Laura Spencer’s (Genie Francis) quest to discover the truth of the messages left to her by Helena Cassadine (Constance Towers). Remember at the disco that Laura found the Lloyd and Lucy Johnson hint?

That tied back to Luke and Laura’s life on the run and, if you recall your ancient history, you’ll remember Lucky was once on the run with them too. The path that Helena is leading Laura down ties back to her past and Lucky could play a part.

In fact, slow burning GH spoilers tease that two items left by Helena tie back to Lucky. Obviously, Laura’s clue makes sense, but what else might tie to Lucky? Could be Lulu Spencer’s (Emme Rylan) bequest since he’s her brother.

In coming days, Laura and Kevin Collins (Jon Lindström) head to Cassadine Island following the bread crumbs Helena left. We also know seven other people will go to the island – it’s like a gigantic Survivor-themed adventure.

GH spoilers tease henchmen and danger on the island, but also some surprises. Might Lucky be held captive on the island? Or could he be someone who comes to his mother or sister’s rescue?

No matter what they do with Lucky, Jonathan Jackson’s return to “General Hospital” is always a welcome treat for fans. What do you think GH fans? Are you excited that Nashville is renewed?

Do you hope to see Jonathan Jackson back as Lucky before he gets busy again shooting the country music nighttime soap? Share your comments below and check back with CDL often for more “General Hospital” spoilers and news.