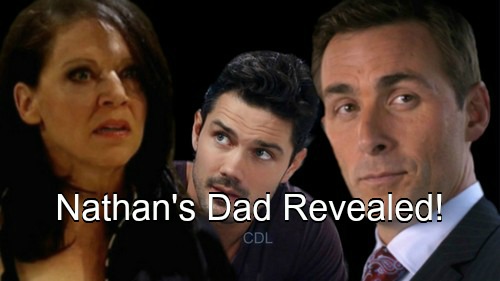 General Hospital (GH) spoilers say that July promises to be a month full of fireworks on ABC’s soap opera! GH has many storylines in the fire that are all ready to ducktail together. Fans have waited patiently for Valentin Cassadine (James Patrick Stuart) to arrive in PC – well he has arrived and will first be seen on Cassadine Island as Theo on Monday, July 11.

Valentin is the unknown evil son of Mikkos Cassadine and Stepson to evil matriarch Helena Cassadine (Constance Towers). Valentin’s mother is unknown. The presence of Valentin Cassadine will be one that affects many PC residents lives. Some of those affected are General Hospital characters fans would never suspect.

Sources say Valentine could very well have a grown child in Port Charles that he never knew existed. Years ago Dr Liesl Obrecht (Kathleen Gati) was running wild with the Casasdine family, having an on again off again steamy affair with Victor Cassadine (Thaao Penghlis) whom she later shot and killed trying to keep the identity of  her baby daddy a secret. Liesl has very deep ties with Helena also.

In 2014 Liesl made Victor Cassadine believe he was her son Nathan West’s (Ryan Paevey) father, she claimed to protect Nathan from his real father who is so evil and treacherous that even Helena shakes in her little booties.

Because Liesl was exposed to the Cassadine family and welcomed into their home she was also exposed to the evil outcast Valentin Cassadine. Liesl explained to Victor before she “murdered” him what Nathan’s real father was like. The dear Dr. O said Nathan’s dad was the most evil and dangerous man that ever walked the earth – and she feared for her and her son’s life if he ever found out about the baby.

This description shed light on why Liesl gave up baby James (who is now Nathan West) to sister Madeline Reeves ( Donna Mills), to protect him and hide the fact that Dr. O was his mom.

Why would Liesl have sex with a man she feared so much? Maybe it was not consensual? Perhaps Valentin lived up to his name and raped her, causing her fear and loathing for Nathan’s father, necessitating her to give the baby up to her sister.

We could also say that Liesl just loved dark evil men back in the day and was a willing partner with creepy Valentin since he fit the bill – but that is not likely. The love of her life, Cesar Faison (Anders Hove), is pretty sinister and yet she adores him without fear!

No, the conception of little Nathan was not a happy event!  Something horrible happened to Liesel with Nathan’s father causing her to give up her precious baby, kill Victor and lie all of these years – living without her darling son.

When Valentin finally reveals himself as the black sheep Cassadine he will take his rightful spot on the Cassadine throne oustting Nikolas (Tyler Christopher) and making one of Helena’s curses come true. Nikolas will have nothing and Valentin will have everything including his own heir, one he has never known… stay tuned to General Hospital and watch this shocking drama begin to unfold Cassadine Island!

Are you shocked that Nathan’s dad has been discovered? Will Port Charles ever be the same once Valentin arrives? Come back to CDL for all your General Hospital spoilers, news and updates!