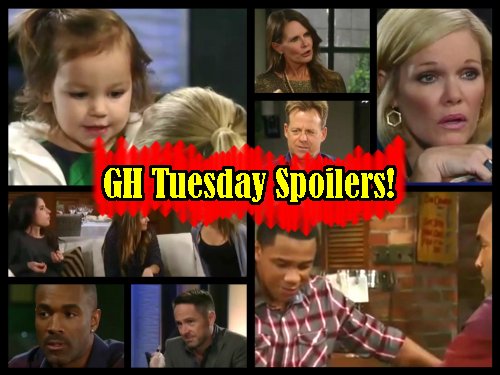 New General Hospital (GH) spoilers for the episode on Tuesday, November 22 reveal that Thanksgiving in Port Charles kicks off with Alexis sharing good news that turns bad, Ava cornering her brother, Kiki bonding with her sister, Lucy vs Scotty, and the return of TJ.

Just in time for the holiday, TJ Ashford (Tequan Richmond) is back in Port Charles and spending some quality time with his uncle Curtis Ashford (Donnell Turner). TJ asks Curtis doesn’t he want to spend time with family but Curtis doesn’t have anyone much in town.

Over at the Davis house, Alexis Davis (Nancy Grahn) shares good news with Sam Morgan (Kelly Monaco), Kristina Corinthos (Lexi Ainsworth) and Molly Lansing (Haley Pullos). Alexis tells them that she will likely get her law license back in January.

Unfortunately, that optimism is about to go out the window based on Alexis’ upcoming drunken antics with Julian Jerome (William deVry) and her driving drunk. In addition to her girls, Alexis is hosting Jordan Ashford (Vinessa Antoine) and Andre Maddox (Anthony Montgomery).

Things get uncomfortable at dinner and Alexis will sneak out to go bar hopping and could ruin her chance to get her law license back. As the day kicks off, Andre tells Jordan that the thing he’s most grateful for in his life is her. That’s nice but won’t last.

Over at the MetroCourt, Ava Jerome (Maura West) observes Julian on a phone call that has her spidey senses tingling. Ava knows something is off as Julian gets a call from his mysterious blackmailer. She wants to know if he needs to talk to her about anything, but he won’t spill.

Scotty Baldwin (Kin Shriner) steps up in a big way for Ava and is determined to get those pills back from Lucy Coe (Lynn Herring). Scotty tries to pull a fast one on Lucy who taunts him by jiggling the bottle of pills in his face. Can he get them from her or will he fail again?

Tracy Quartermaine (Jane Elliot) tries to fend off a holiday disaster at the Qs and Dillon Quartermaine (Robert Watkins) shows up to share a turkey sandwich with Kiki and hang with her so she’s not alone on the holiday mired in guilt over Morgan Corinthos (Bryan Craig).

Now that Nelle Hayes (Chloe Lanier) overheard the talk about Carly Corinthos (Laura Wright) and Jasper Jax (Ingo Rademacher) kissing, we can expect her to hightail it to Sonny’s where he’s boozing and reveal what she overheard as she makes a big move in her revenge scheme.

Don’t miss a moment of the action coming on the Tuesday, November 22 GH. Share your comments below and be sure to check back with CDL often for the latest General Hospital spoilers and news.