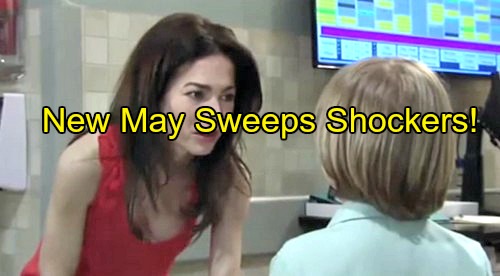 “General Hospital” (GH) spoilers tease that halfway into May, there is still tons more May sweeps action coming on the next weeks’ episodes. There’s a wedding, another dead body, an attention grab, a public humiliation, danger, romance, and uncomfortable truths for Laura, Griffin, and Carly. Plus Sam and Jason have serious trouble!

Here’s shockers on what’s is still to come for May sweeps spoilers on GH!

Brad Cooper (Parry Shen) and Lucas Jones (Ryan Carnes) will say their I do’s at the Nurse’s Ball which is fitting since that’s where they got engaged. Also, GH spoilers say it looks like Brad may tap Felix DuBois (Marc Samuel) for best man duty. Will he say yes?

But even as their wedding is set to take center stage, Dr Liesl Obrecht (Kathleen Gati) schemes to steal the show yet again. What can we expect Dr O to do this year? She’s also still digging into Hamilton Finn (Michael Easton) and he’s got big secret plus an agenda.

Speaking of wedding, General Hospital spoilers warn that Maxie Jones (Kirsten Storms) and Nathan West (Ryan Paevey) talk about theirs, but Maxie still can’t let Claudette go – even after Nathan suffered a brain injury. Will she take off to NYC to spy on Claudette? Will she get answers that make things worse?

Griffin Munro (Matt Cohen) still has more explaining to do about being a secret priest with a gunshot scar on a break from the church. More to come soon on his shared past with Nathan plus Griffin finds out something about his own past that he did not know.

Carly Corinthos (Laura Wright) presses on with her kidney investigation and it becomes more important when some test results come back that indicate Josslyn Jacks (Eden McCoy) may have a medical issue. The truth is more disturbing than Carly can imagine.

Curtis Ashford (Donnell Turner) gets closer to Valerie Spencer (Brytni Sarpy) but she may be jealous when he seems way too close to and concerned about Hayden Barnes (Rebecca Budig). Hayden and Nikolas Cassadine (Tyler Christopher) make a big scene – likely at the ball.

Also, Liz Webber (Rebecca Herbst) and Franco (Roger Howarth) grow closer according to General Hospital spoilers and things deepen more after Liz is publicly humiliated for the second year in a row at the Nurse’s Ball. Is it Hayden that rakes her over the coals? Or perhaps Carly?

Julian Jerome (William deVry) is looking for a sofa to sleep on after Alexis Davis (Nancy L Grahn) ousts him from their home. And things will get worse when Jordan Ashford (Vinessa Antoine) slaps cuffs on him at the big event. But which crime is Julian being arrested for?

Kristina Corinthos (Lexi Ainsworth) and Aaron (John DeLuca) keep dating but we wonder if Aaron seems a little too interested in Sonny Corinthos (Maurice Benard) and if their meet cute was a set up. Also, Kristina can’t get Parker Forsyth (Ashley Jones) off her mind and Parker will be back in Port Chuck before long.

A dead body turns up and the news is devastating to Morgan Corinthos (Bryan Craig). So who could it be that would specifically devastate Morgan? Well, we haven’t seen Darby Collette (Jesica Ahlberg) in a while and she always seemed dodgy, so perhaps it’s her.

GH spoilers indicate it’s someone that everything thought was dead. Is it a mob enemy? Something huge happens to Jason and Sam Morgan (Kelly Monaco) the night of the Ball that sends them off on a potentially dangerous journey.

What do you think GH fans? Will Dr O interrupt the Brad-Lucas wedding with her antics? Will Franco escort Liz to the ball? Will Alexis defend Julian for the upcoming arrest or is she done with him for good? Share your comments and check back with CDL for more “General Hospital” spoilers and news.